Published between 1643 and 1940 in Antwerp, Brussels, Tongerlo and Paris The Library’s 350 year history of continuous activity is matched by only a few publishers, among them the Bollandists, whose major work, the Acta Sanctorum, or Deeds of the Saints, began to appear nine years before the foundation of Chetham’s in 1643 and the last volume of which, published in 1940, does not quite complete this monumental project.

Perhaps the most remarkable collective scholarly undertaking of all time, the sixty-seven huge folio volumes of the Acta Sanctorum present the lives and acts of the saints arranged according to their feast days throughout the calendar year. Conceived in 1607 by the Jesuit scholar Heribert Rosweyde of Utrecht (1569-1629), the work of producing this extraordinary collection of texts was continued upon his death by Jean Bolland (1596-1665) and his pupils.

The Bollandists, as they became known, modified and extended the original scope of the work, which suffered from significant interruptions, including relocation from Antwerp to Brussels. The work began again in earnest in 1837 after the restoration of the Society of Jesus, and has now proceeded to the beginning of the month of December. At the end of the calendar year the whole project will begin again with the inclusion of new saints and the elimination of others. By definition this is a work which can never be completed, making it one of the most ambitious and fantastic projects ever conceived. The Library began collecting the Acta Sanctorum in 1687, paying the sum of £12 for the first fourteen volumes, and has continued to add to the collection in batches. The large leather-bound volumes take up over five metres on the shelves. 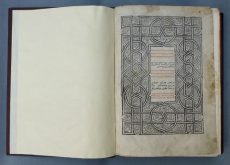