An Introduction to Incline Press

Incline Press was founded in 1993. From their workshop in Oldham town centre, Graham Moss and his team specialise in producing hand-bound, letterpress-printed books.

Since their first publication, an edition of Enid Marx’s Nursery Rhymes, they have published over fifty books and earned a loyal following of readers and collectors. The extraordinarily detailed and imaginative Art for Life: The Story of Peggy Angus, was a prize-winner at the 2005 Oxford Fine Press Book Fair.

Chetham’s holds a large number of Incline Press publications and continues to collect their work. Recently, this collection has been augmented by a sizeable archive of mock-up books, correspondence, jobbing printing and prospectuses from 1993 to the present. It will continue to grow as we acquire new publications and ephemera over time.

A QuickList of published books can be found here. If you would like to view the archive, please contact the Library to arrange an appointment.

Further information on Incline Press, including their current catalogue, is available on their website. A Short History of Incline Press

Graham Moss was a history teacher with an interest in paper conservation and book repair when he acquired his first press in 1990.

His interest grew and he began to produce stationery and cards for friends and relations. Soon he had acquired a much larger Arab press, which he rebuilt, setting up a printshop in the backyard shed, its entrance onto Incline Road providing a name for the new Press.

In 1993 Incline Press produced its first book, a new edition of Nursery Rhymes by Enid Marx. Since then over fifty titles have been produced and the press has grown considerably, necessitating a move to larger premises, a three-storey early nineteenth-century cotton mill in the heart of Oldham town centre. The Story of a Book

The creation of a hand-made book is a lengthy process. At Incline Press it often begins with a text or set of illustrations which appeal to the printer, or an approach from an author or artist. Each book is a deliberately designed craft object, with great care and satisfaction taken from the choice of paper, the setting of type and the operation of the press.

Each Incline Press book is designed and printed at the press, sewn on tapes with linen cloth and bound with cloth for extra strength, then bound either at the workshop or sent to a trusted bookbinder. In addition, unbound copies of books are usually available in sheets to be bound by individual collectors. Finished books are numbered and usually signed by either the author or the artist, and each title is generally produced in a special edition as well as the standard edition made available for general sale. Making a book is a complex process that requires a lot of planning to come out right.

Although some book designers make detailed drawings of page layouts or, nowadays, design their book first on the computer, Graham Moss initially plans a layout in his mind, and then makes any minor alterations by arranging and rearranging the metal type on the composing stone.

That, however, does not mean that mock-ups have no place in the process. Most Incline Press books start coming together well before the printing is finished; as the printed pages pile up around the workshop, so the book begins to grow.

At some point in the process, it becomes possible to bind up a relatively accurate prototype, with the initial pages printed, but the final pages still blank. Often the printed pages are handling sheets from the daily work, and bear the inky fingerprints to prove it. This mock-up makes it possible to work out binding ideas, and, if the book is to be bound out of house, provides a master for binding estimates.

Finally, a mock-up book makes the rounds of book fairs and lectures, giving prospective customers an idea of the finished product. Chetham’s Librarian Michael Powell first met Graham Moss of Incline Press in 1998, after seeing an advertisement for the press in The Book Collector. A trip to the workshop was arranged, followed by a return trip to the Library, and a firm friendship was established.

The Library’s focus on material from the north west of England, together with our particular interest in the history and tradition of printing, meant that we were keen to acquire and maintain an archive of material relating to Incline Press, and we now hold the full back catalogue, as well as buying each new title as it is produced.

Chetham’s Library and Incline Press have collaborated on several projects, including The Books of Jonah and Danger and Destiny in the Fairytales of the Brothers Grimm, both written by David Blamires to accompany exhibitions here at the Library. 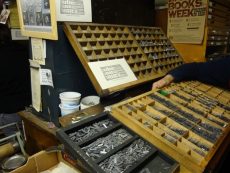