Under the terms of Chetham’s will the sum of £200 was allocated for the provision of five small libraries of books, designed to be ‘chained upon desks or to be fixed to the pillars or in other convenient places’. They were to be located in the parish churches of Manchester and Bolton and in the parochial chapelries of Gorton, Turton and Walmesley.

The feoffees were instructed to purchase ‘godly Englishe Bookes … for the edification of the common people’. The library at Gorton was the first of the five libraries to be completed, containing 51 works with the later addition of four more.

The library is a combination of the ancient armarium or almery with the lectern, where the books are chained on two shelves divided into partitiones. The books are shelved with the fore-edge rather than the spine facing outwards to prevent the chains from rubbing against the bindings with use. Originally a long sloping shelf in front of and immediately below the side-opening doors would have served to rest the volume when in use. This has since been removed and the hinges replaced at the bottom.

Of the five original libraries, only two have survived intact, those of Gorton and Turton. The chained library of Manchester was dispersed about 1830 and the books ended up at second-hand booksellers in nearby Shudehill. A number of the books belonging to the Bolton library are to be found in a chained library given by James Lever to Bolton school in 1694. Sadly the library intended for Walmsley was never completed.

In 1984 the chained library of Gorton was placed in Chetham’s Library on permanent loan and was bought outright with the help of a Lottery grant in 2001. 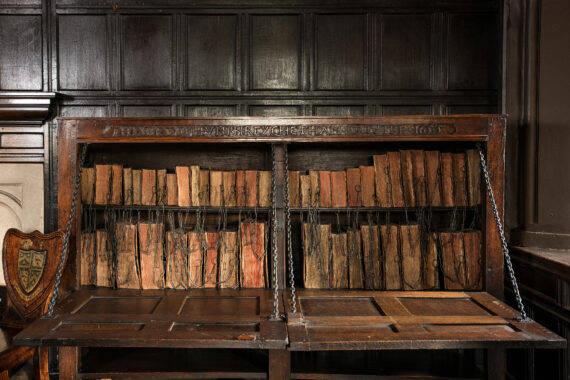