Originally one of the rooms allocated to the warden of the medieval college, this is one of the most richly appointed in the building. The most notable decorative feature is the timber ceiling, divided into nine panels by moulded ribs decorated with bosses including some with grotesque designs and an impressive Mouth of Hell mask with a sinner ensnared in its jaws. Each panel is divided by diagonal ribs. The design is consistent with a date from the first half of the fifteenth century, and there are some similarities with the panels in the roof of the choir of the Cathedral.

The elaborate plasterwork consists of a trail design, probably carried out during the seventeenth-century conversion. The panelling and doors are also of seventeenth-century date. The set of twelve ladder-back mahogany chairs date from about 1770 and stand cheek by jowl with earlier oak furniture, including a three-legged chair said to have belonged to Humphrey Chetham, and some carved panel-back chairs typical of the north country. Two further items date from the beginning of the eighteenth century: a handsome walnut settee with cabriole legs resting on ball and claw feet, and a one-fingered lantern clock, still in good, albeit noisy, working order.

The large oak refectory table against one wall bears a strange mark in one corner, which according to legend represents the devil’s hoofprint. In 1595 the Wardenship of the College passed to John Dee, a member of the court of Queen Elizabeth and a learned scientist, astronomer, mathematician and philosopher who was also the owner of a large library. His reputation as an alchemist and student of the occult was well established, and his arcane endeavours are supposed to have resulted in the appearance of the devil, who materialised over the table and left behind the mark of his hoof. 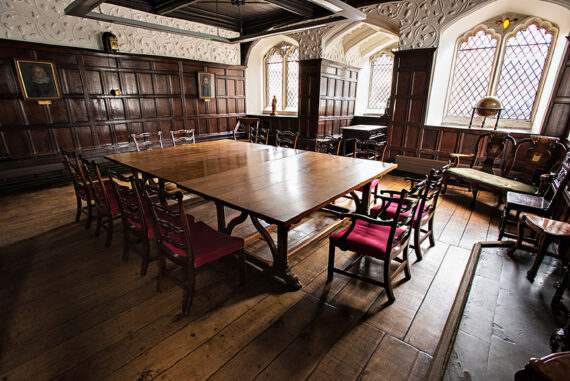