One of the strengths of the Library’s collection is the sheer number of Bibles and New Testaments. Of Greek New Testaments, for example, the Library holds the first printed (Complutensian Polyglot 1514-17), the first published (Erasmus, 1516), and the smallest (a 32mo of 1629 measuring 77mm). Many of these were some of the earliest acquisitions purchased by Humphrey Chetham’s Trustees, and with the addition of the numerous lexicons, dictionaries and concordances necessary to understand them, the collection at Chetham’s grew quickly in status and significance. This beautifully illustrated and typographically important edition of the New Testament Gospels is written in Arabic, with an interlinear Latin translation attributed to Antonius Sionita. It was edited by Giovan Battista Raimondi (1536-1614), a renowned Orientalist who was later responsible for the creation of the Medici Oriental Press which specialised in the publication of works in Oriental languages, especially Arabic. There is no title page or prefatory material and the work, which reads from right to left, begins immediately, although the Library copy has a considerable amount of annotation before the text begins. There is further annotation throughout the text, much of which is made in silver ink. There are a total of 149 woodblocks from 68 blocks, carved by Leonardo Parasol to designs by Antonio Tempesta, a Florentine artist most famous for his collaboration with Vasari on the frescoes in the Palazzio Vecchio. The illustrations were intended as an aid to missionary work in Muslim countries. Illustration from Matthew 17 showing the casting-out of a demon from a young boy. 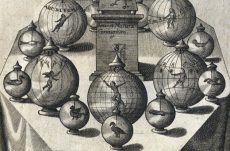 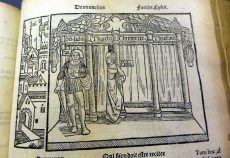 next - Works of Terence in French and Latin