Aulus Gellius (ca. 125 AD—after 180 AD), was a Latin author and grammarian, famous for his Attic Nights, a commonplace book, or compilation of notes on grammar, philosophy, history, antiquarianism and other subjects, preserving fragments of many authors and works who otherwise might be unknown today.

Like many books in the library, this manuscript is more important because of its previous owner than for its subject matter, having been owned at one time by Hungary’s greatest King, Matthias Corvinus.

Corvinus (1443-1490), was King of Hungary and Croatia from 1458. He was an indefatigable reader, frequently staying up half the night reading. His library, the Bibliotheca Corviniana, was one of Europe’s greatest collections of secular books, second in size only to the Vatican Library. The size of the library is unknown, and estimates range from as little as 500 to as many as 50,000 volumes.

The Library was destroyed in the Turkish sack of Budapest in 1526, but over two hundred books, mostly manuscripts, have survived. The Chetham copy of Aulus Gellius is one of only a handful of Corvinas in UK libraries. The manuscript is written in a clear Roman hand on 252 leaves of vellum, with Greek quotations added in red by a different hand. Each book opens with a large initial decorated with ‘white vine-leaf’ ornament and the first page of text has a three-quarter border of the same ornament. A coat of arms at the foot of the page has been defaced.

The manuscript was produced in Florence, written by a scribe named Humbertus for the merchant Francesco Sassetti. Sassetti was forced by financial difficulties to sell some books at the end of his life and a number were bought by Corvinus. The history of the manuscript after the sack of Budapest is not known. in the eighteenth century it was owned by the Manchester poet and shorthand writer John Byrom and was presented to the Library in 1870 by his descendent Miss Eleanora Atherton.

The book has possibly the Library’s most beautiful binding: a red goatskin, tooled in gilt and blind, a characteristic product of the Corvinus bindery in Buda. The title is stamped in gold on the lower cover, and Matthias’s emblem, a raven standing on a gilt branch and holding a gilt ring in its beak, appears in the centre of both covers. 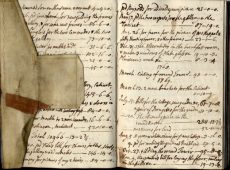 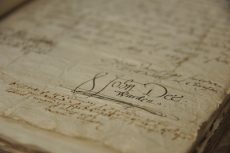