Estienne’s edition of Plato’s works was the first truly complete edition of the dialogues, superseding that of Aldus Manutius, published in Venice in 1513 in two volumes, and that of Valder, published in 1534 in Basel. It remained for several centuries the standard reference edition and still provides the basis of the universally accepted system for quoting Plato.

For the translation Estienne commissioned a new version from Jean de Serres (Serranus, 1540-98), which he himself revised and corrected. Of all Henri Estienne’s publications the Plato is perhaps the most lavishly decorated.

The Library acquired the three-volume copy of Plato in the very first parcel of books bought on 2 August 1655 at a cost of £3 10 shillings. What the Library didn’t realise at the time was that the copy they bought had once belonged to the Renaissance playwright and poet Ben Jonson. Jonson was a considerable book collector and a large number of his books have survived. His motto Tanquam explorator (As it were an explorer) is written at the top of the title page. In the margin, just above the imprint is his signature Sum Ben Jonsonii (‘I am Ben Jonson’s’). The book had been given to Jonson by Henry de Vere, 18th Earl of Oxford (1593-1625). 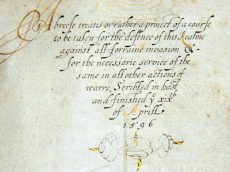 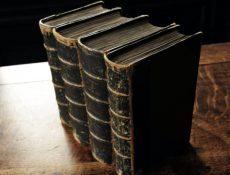 Next - The Manchester Man