The booke of the common prayer and administracion of the sacramentes, and other rites and ceremonies of the Churche: after the vse of the Churche of England This is one of only twelve copies of the first edition of the Book of Common Prayer compiled in 1549 by Thomas Cranmer, Archbishop of Canterbury. It was the first single manual of worship in a vernacular language designed to be used by both priest and people, combining Cranmer’s translations of the four main service books of the pre-Reformation church with collects, psalms and canticles. In 1552 Cranmer produced a second, revised edition, a copy of which is also held at the Library, and this was followed by a third in 1559. After the Civil War, major revisions and alterations were made to the text, resulting in the 1662 edition which remains the official Prayer Book of the Anglican church and celebrates its 350th anniversary in 2012. The language of the Book of Common Prayer, like that of the King James Bible, has become woven into the fabric of the English language to the extent that it is the second most cited work in The Oxford Dictionary of Quotations. This page showing the month of February from the calendar at the beginning of the book lists saints’ days as well as readings and psalms for matins and evensong on each day of the month. The calendar has been annotated with notes for the use of the owner of the book, who has included ‘vygylls’ for the red-letter feasts. 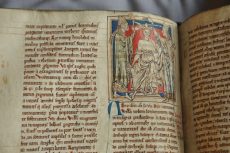