The Library’s collection of Greek Orthodox liturgical books was acquired on 17th October 1674 from the Library’s usual supplier Robert Littlebury of Little Britain in London. In his invoice the books are described thus: ‘The Greek Liturgies in 8 volumes. fol, 7 vols, 4to and 3 volumes octavo…£9-10-0’. A note from Littlebury along with his bill states that if the order had not come from the Library for the purchase of these books, ‘these Greek Liturgies had been gone to Dr. Castell, whoe writt the Oriental Lexicon, it being very rare to see so many of them’. Edmund Castell was a noted Semitic scholar, and Professor of Arabic at Cambridge, and was one of Littlebury’s most important customers; indeed, Littlebury was chosen to value the library of Castell upon the latter’s death in 1684-85. In this order, the Library acquired some thirty-four separate publications in 18 volumes. All were produced in Venice between 1596 and 1625 and, with a couple of exceptions, all were printed by Antonio Pinelli the Elder. The Pinelli firm began operations in 1600 with the publication of a series of liturgical and vernacular texts, Antonio having acquired the stock of a number of defunct presses of the late sixteenth cenury that had specialised in Greek printing, including the stock of Christoforo Zanetti. From the Zanettis they also acquired the type cut in 1548 by Guillaume Le Bé which they used for their liturgical publications. Perhaps the most important of these books is the 1602 Euchologion, which formed the basis of Patriarch Nikon’s reform of the Russian service books that resulted in the schism of the Old Believers. The Old Believers separated after 1666 from the official Russian Orthodox Church as a protest against church reforms, and continue liturgical practices which the Russian Orthodox Church maintained before the implementation of these reforms. Thanks to the generosity of the Greek community in Manchester, the set of liturgical books were splendidly rebound a number of years ago by book binder Mark Harrison. 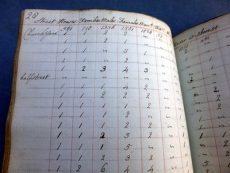 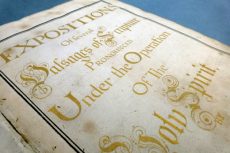 next - Works of the French Prophets