The Genoa Psalter, also known as the Octaplum or Quadruplex Psalter, was the first multilingual, or polyglot, psalter to be published. Printed in Genoa in 1516, it displays the words of the psalms laid out in eight columns – four per page – in Hebrew, a Latin paraphrase, the Vulgate Latin, the Septuagint Greek, Arabic, Aramaic (‘Chaldean’), a Latin paraphrase, and the editor’s notes, known as the scholia or gloss. The Psalter was personally financed by the great Genoese language scholar Bishop Giustiniani, who dedicated himself to the study of Oriental languages, and had met Erasmus and Thomas More during his travels. Handsomely printed in red and black, the work is a triumph of typographical and scholarly enterprise, being one of the earliest to make use of movable Arabic type. Within the text may be found the first printed reference to Christopher Columbus, also a native of Genoa, whose expeditions were perceived by Giustiniani as a fulfilment of Biblical prophecy. A footnote to Psalm 19 (‘their sound is gone out through all the earth and their words to the end of the world’) offers a biographical sketch and an account of his discoveries. Giustiniani also prepared a polyglot New Testament but was not sufficiently encouraged by sales of the psalter, which was not a commercial success, to proceed with the publication of this.

The Library has acquired all the great Polyglot Bibles over the years, including the Complutensian (New Testament only), the Plantin, the Le Jay and the Walton. 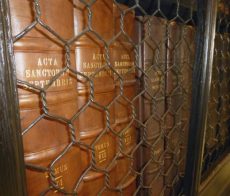 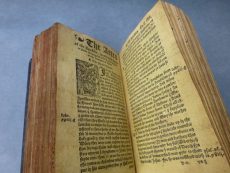