James Gibbs, A Book of Architecture, Containing Designs of Buildings and Ornaments, London, 1728 At the age of twenty James Gibbs travelled to Rome to begin his training as a Catholic priest. However, within a year he had thought better of it, deciding instead to study architecture, which he did for the next four years.

Without this sudden change of mind the architecture of Britain might have turned out very differently, for Gibbs’ career flourished, and he became one of the most important British architects of the eighteenth century. Through his work – which most famously included the church of St Martin-in-the-Fields and the Radcliffe Camera in Oxford – and his publications, Gibbs became very influential and helped to formulate the language of “Georgian” design. Gibbs’ Book of Architecture, along with his 1732 publication The Rules for Drawing the Several Parts of Architecture, featured many of his own designs and were intended to assist ‘such Gentleman as might be concerned in Building, especially in the remote parts of the Country, where little or no assistance for designs can be procured’. The large folio work is lavishly illustrated with perspectives and blueprints for his designs, including drawings of decorative details such as urns, funeral monuments, ornamental gates and decorative marble cisterns. 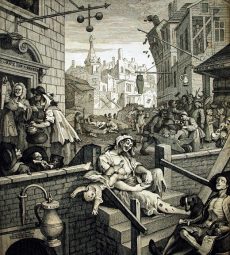