The College House of Manchester was founded in 1421 as the College of the Blessed Virgin. As it was not a monastic foundation, it escaped Henry VIII’s Dissolution of the Monasteries, was but was dissolved under the Chantries Act of Edward VI in 1547.

Two years later, along with many other chantries dissolved under the Act, it was sold to a private buyer, in this case Lord Stanley, the fifth Earl of Derby.

The Grant by Letters Patent of Edward VI was awarded on 9 July 1549 and transfers ownership of College House, its site and ‘all buildings, orchards, gardens, waters, fisheries and fishing within the precinct of the same’ to ‘Edward Earl of Derby, Lord Stanley and Strange, Lord of Man and the Isles, Knight of the Most Noble Order of the Garter’, and his heirs. As well as College House, the grant included other land and fishing rights in Manchester and Lancashire, all for the sum of two hundred and sixty-eight pounds, three shillings and fourpence.

The single sheet of coloured and silvered vellum is remarkably well preserved, although the royal seal is damaged, and is written in the hand of the chancery scribe, who signs his name as Waynewryht. It is likely to have been acquired by the Library in the mid-seventeenth century when the buildings were sold to the executors of Humphrey Chetham. 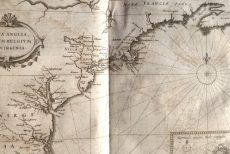