Edward Hobson, Musci Britannici: a collection of specimens of British mosses and hepaticae collected in the vicinity of Manchester (1822) Edward W. Hobson (1782-1830) was born in Manchester and died in Bowdon, Cheshire at the age of only 48. He worked as a grocer’s assistant and lived his whole life in very humble circumstances, but became widely celebrated as a botanist, entomologist and geologist. Hobson became the first president of the Banksian Society in Manchester and also served as president of the Lancashire Botanists.

In 1818 Hobson published his Musci Britannici which was illustrated not with engravings, but with actual dried specimens of mosses and hepaticae. In this manner, only a very few copies could be produced, costing £1 each. 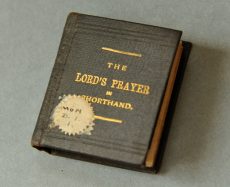 next - Lord’s Prayer in Shorthand