This is the first printed edition of Homer, and includes the Iliad and the Odyssey, two of the earliest and most important works of European literature. It is the first large-scale printing in Greek, and probably the first Greek book printed in Florence. The publication was financed by the brothers Bernando and Nerio Nerli, and was printed by Demetrius Damilas, a Cretan scribe who had previously been active in the printing of Greek books in Milan since 1476. It was based on the handwriting of Michael Apostolis, which was simpler and more distinct than Damilas’s own elegant but elaborate hand. The work was edited by Demetrius Chalkokondyles, who was professor of Greek at the Florentine Studio from 1475 until 1491. A busy man, he married in 1484 at the age of sixty-one and fathered ten children. The text of Homer was not printed again in Greek until Aldus’s octavo edition of 1504, which was based directly on Chalcondylas’s text. Chetham’s Library copy was bound in Manchester, probably in the nineteenth century, by Charles Winstanley, in full calf binding with gold tooling. The gilt foredges are attractively gauffered in the centres and corners. 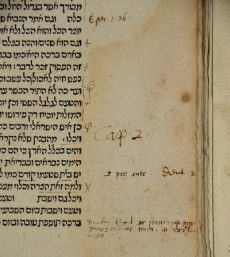 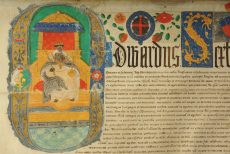 next - Grant of Edward VI