This miniature two-volume vellum Bible dates from the mid-thirteenth century and was given to the Library by Roger Kenyon of Manchester some time before 1680.

It contains all the books of the Old and New Testaments as well as a set of prologues which provide commentaries on some of the books. Written in a very small, neat hand, possibly in France, this was intended for personal devotion and was designed to be held in the hand, rather than placed on a desk or plinth.

It is the smallest of the Library’s Bible manuscripts, measuring only 14 x 10 cm and is written on high quality vellum. Vellum is a translucent material produced from the skin of a young animal that has been soaked, limed, scudded and dried under tension, usually on a wooden device called a stretching frame. The vellum used in this manuscript is remarkably fine, almost like tissue paper, and was probably taken from a young animal and produced to a higher standard than the usual material.

The Vulgate translation of the Bible was made around the 4th century, and was later known as the versio vulgata, or ‘commonly used translation’ that became the definitive translation used by the Roman Catholic church.

In the manuscript, Biblical books and their prologues are written in red and blue, and the ornament runs nearly the length of the page. But the Bible at this time was not divided up into verses and whilst the chapters are marked in red or blue, the absence of verse divisions and also blank space between the various books, makes it difficult to read for the modern eye. Shown below is the beginning of the Gospel of John ‘In principio erat verbum’ (In the beginning was the Word). 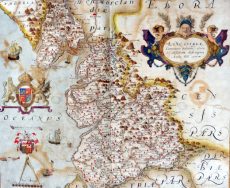 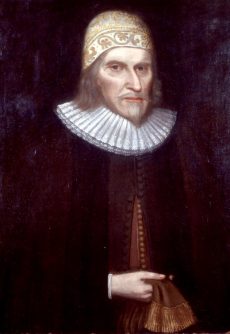 next - portrait of Humphrey chetham