New for 2020 – we’re uploading an image a day from the Scrapbook to a new page in our From Home series! But please read on first to hear a little more of what you can see there –

The Library has a large number of scrapbooks compiled by local historians and antiquarians. Perhaps the most important, and certainly the most visually appealing, is the Manchester Scrapbook, which was compiled by Francis Egerton, 1st Earl of Ellesmere, and presented to the Library in 1838. The Manchester Scrapbook contains over three hundred and fifty items including pen and ink sketches, watercolours, maps, prints and engravings of Manchester buildings and persons. It includes works by the Manchester antiquarian and saddle-maker Thomas Barritt and the artist Daniel Orme, and was an attempt to record in pictures the changes that had taken place in the town over the previous half century. Barritt’s works depict characters, customs and places which had either disappeared or were on the verge of demolition. This series of intimate character sketches with handwritten captions offer a glimpse into life in pre-industrial Manchester that has largely been overshadowed by the horrors of the nineteenth century. 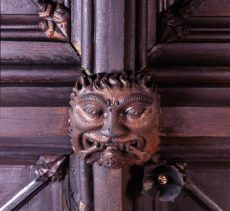 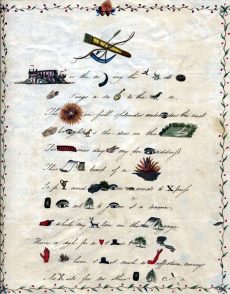