John Dalton (1766-1844) was born in Cockermouth and brought up a Quaker, a faith he retained throughout his life. At the age of twelve he began his long career in tuition, teaching at a local school. In 1793 Dalton came to Manchester to take up a professorship, and immediately joined the Manchester Literary and Philosophical Society, an attachment he maintained until his death. His decision to come to Manchester to teach and study was almost certainly influenced by the presence of Chetham’s Library, which had by then established a significant collection of scientific and mathematical works. He wrote in a letter of 1794: ‘There is in this town a large library, furnished with the best books in every art, science and language, which is open to all, gratis’. This small notebook dates from Dalton’s time spent in Kendal, before he came to Manchester. It measures 10 x 7.5 cm and has eighteen leaves recording genera and species of English plants, and is covered with a delightful example of handmade paste paper. The notebook is from the collection of James Crossley and the additional notes are in his hand. The Library also holds a small collection of letters written by Dalton to his friend, Mary Taylor of Moston (1803-1895). Mary was Dalton’s pupil, and her intellect obviously made a strong impression on him. He left her £100 in his will, writing in a note: ‘To my highly esteemed pupil and most agreeable friend Mary Taylor of Moston near Manchester aforesaid One Hundred Pounds, as a testimony of the pleasure I have had in the instruction of one of such superior mental abilities’. The Library holds other papers from the collection of Mary Taylor, a remarkable woman who challenged herself to recover from a sickly childhood, adopting an abstemious life of fresh air and exercise as well as a robust programme of study. She went on to live to be 93 years old. Dalton has connections with several other Manchester libraries. His papers, many of which were badly burned in the Blitz, are deposited at John Rylands Library, and he was an honorary member of the Portico, where he was responsible for maintaining and winding the Library clock. The Lit and Phil donated copies of several of Dalton’s works to Chetham’s Library, including his seminal work on atomic theory, A new system of chemical philosophy. 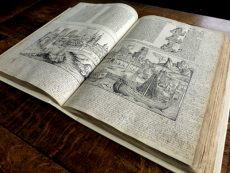 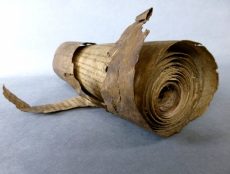