Palm leaf manuscripts served as the paper of the ancient world for thousands of years and continued to be used in parts of Asia until the introduction of printing presses in the early 19th century.

The leaves are laced together and then tied onto two solid wooden blocks, but their fragility and impermanence meant that documents often needed to be copied onto new sets of dried palm leaves. The introduction of printing brought the cycle of copying from palm leaves came to an end, and today many governments are making efforts to preserve what is left of their palm leaf documents. The example at Chetham’s is remarkably well preserved and beautifully embellished with hand-painted gold leaf. Thanks to Dr Tilman Frasch, Senior Lecturer at Manchester Metropolitan University and a leading expert on Burmese history, we have been able to discover more about the palm leaf manuscript.

The manuscript, which dates from April-May 1741, was commissioned by Maung Tha Kyaw and his wife, royal tax collector of Ywa-pulai, and is a commentary on the Buddhist scriptures. Its full title is Vinayavibhanga-Atthakatha (i.e. the Samantapasadika by Buddhaghosa, the main commentary on the Vinaya or rules for monks). Each page has seven lines, and the leaves are contained between two teak blocks. There should be 295 folios but all before folio 123 are missing as well as the final folio. There are three folios with colophons and after each of these leaves, paper slips have been inserted showing in modern handwriting the title of the following section. 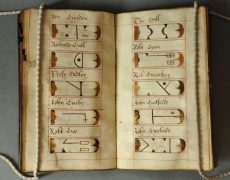 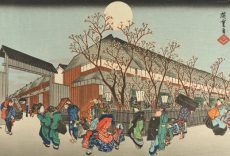