The tall case walnut clock in the Reading Room was given to Chetham’s in 1695 by Nicholas Clegg, a former pupil of the school who left in 1689. Recent restoration work has given us new insight into this beautiful piece of furniture, which has a barometer set within the door casing. The clock was made by Thomas Aynsworth of Westminster, and it has always been thought that Clegg, who it was believed was apprenticed to an instrument maker, was responsible for the barometer. However, restoration work by antique barometer specialist Derek Rayment has revealed that it was in fact made by the London instrument-maker John Patrick (fl. 1686-1720?) When the back of the case was removed, a wonderfully preserved trade label was discovered dating the instrument to c. 1685. It is thought that the barometer was bought from Patrick and adapted and fitted to the long case clock door at about the same period. We have been able to find out a little more about John Patrick from Nicholas Goodison’s 1969 work English Barometers 1680-1860. He was a highly esteemed instrument-maker who appears to have been the first to specialise in the manufacture of barometers. Little is known about his life, but he joined the Clockmakers’ Company in 1712, claiming that his barometers were sold ‘at most eminent watchmakers in London’, and was known to Edmund Halley. Unfortunately Patrick’s elegant barometer has suffered a hard life. Victorian alterations to the case and works caused considerable damage which needed sensitive restoration. The fitting of a new tube had necessitated the alteration of the base, which had been carved out and then held together with ugly metal rings. These were carefully removed and the woodwork restored to its original design. The date 1867 – presumably the date of the alterations to the piece – has been marked on the back of the case in black ink. Further alterations were made in the 1970s, when the clock mechanism was replaced with a modern movement which runs for a month between windings and is remarkably accurate, losing or gaining only a few seconds each month. What sort of movement it had before that we do not know, although it became infamous as part of the Chetham’s boys’ recitation for visitors as ‘the clock that strikes once a year’ along with ‘the cock which crows when it smells roast beef’ and other curiosities. The clock is now working smoothly, having been lovingly disassembled, cleaned and polished, rebuilt and calibrated, and fitted with a new weight line.

The work of repairing and restoring this lovely piece of furniture has taken several months and has involved several specialist craftsmen. We are enormously grateful to the skilled work of Peter Hall of Kendal who restored the case, Clock Repair Ltd of Rochdale who restored the clock mechanism and Derek Rayment of Malpas who worked on the barometer.

Lastly, the sharp-eyed among you may notice the unhappy position of the mercury in the barometer: yes, more rain. But, thankfully, not ‘much rain’… yet. 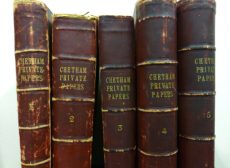