Horace Walpole (1717-97) was born to wealth and power as the son of Robert Walpole, England’s first Prime Minister. He devoted his long life to writing, building and observing the social and political life of his times.

Walpole’s country seat, Strawberry Hill, was a villa on the banks of the Thames, which he gradually transformed into a ‘little Gothic castle’. The house attracted so many visitors that Walpole had to issue tickets and rules of admission, which he printed on his own press.

Visitors came to see not only the house and gardens, but also the pictures, objets d’art, books and manuscripts which crammed the small rooms and combined with the decorations to create what Walpole called an atmosphere of ‘Gothic growth’, which, in a dream, had inspired him to write The Castle of Otranto, his first horror novel.

The notebook was presented to the Library by Colonel A.F. Maclure in 1924. 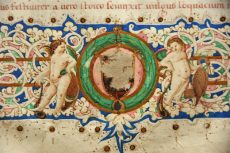