Did you know that the National Anthem of the United States gets its melody from a popular 18th-century British drinking song? We learned that from listening to Radio Four’s In Our Time with Melvyn Bragg last week, which reminded us that one of the titles in our new chapbook exhibition is ‘A Bacchanalian Garland’. Printed by Elizabeth Sergent of Preston in about 1790, the little eight-page book contains five drinking songs, just right for a proper night out on the razz.

Sure enough, when we checked, one of them is the song Melvyn and his guests were discussing. ‘To Anacreon in Heaven’ was written for London’s Anacreontic Drinking Club, and its wide-spread popularity is attested as much by this Preston printing as by its choice for Francis Scott Key when he celebrated the American defence of Fort McHenry in Baltimore with his ‘Star Spangled Banner’ written to be sung to this tune. Although it’s a difficult song to sing at the best of times, we spent an amusing half hour trying to get the words and the tune straight in our heads before getting back to the exhibition:

To Anacreon in Heav’n, where he sat in full Glee,
A few Sons of Harmony sent a Petition,
That He their Inspirer and Patron wou’d be;
When this Answer arriv’d from the Jolly Old Grecian,
‘Voice, Fiddle, and Flute,
No longer be mute,
I’ll lend you my Name and inspire you to boot,
And, besides, I’ll instruct you like me, to intwine
The Myrtle of Venus with Bacchus’s Vine. 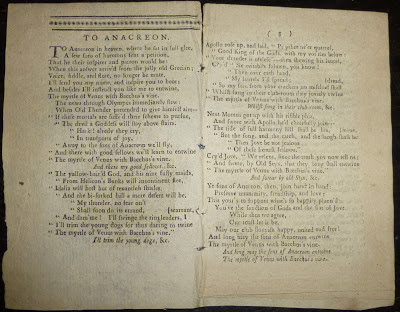 If you’re curious to hear it sung, here’s a link to the National Museum of American History’s version of the song: Listen to the Anacreontic Song (MP3)