A closer look at the Palatine Building 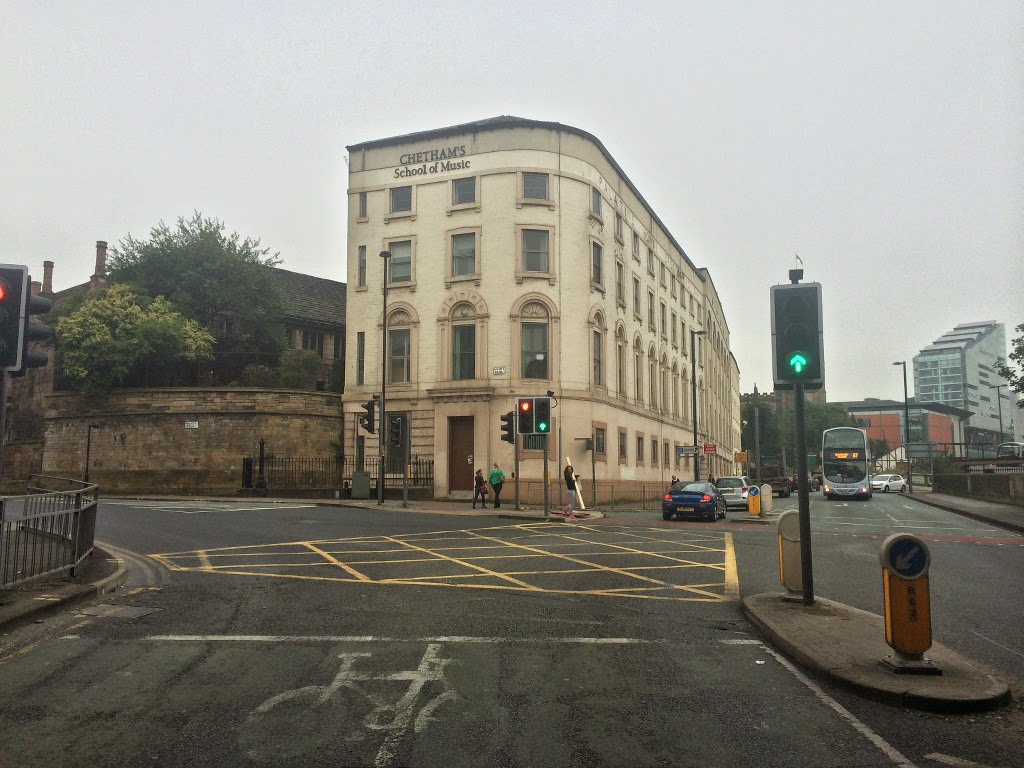 The Palatine building which stands on the west side of the Chetham’s site was not originally built as one single structure, but was constructed in three distinct parts between 1837-45 by the Manchester and Leeds Railway Company. These consist of the south building nearest the Cathedral, which operated as livery stables and offices, the middle building, which was offices and shops, and the most significant section, that to the north of the site next to Hunt’s Bank, which was built as a railway hotel. This was designed by J.P. and I. Holden, architects, and constructed in 1842-43 as a railway hotel for the newly opened Victoria Railway Station – one of the earlier hotels of its kind, although not the first. 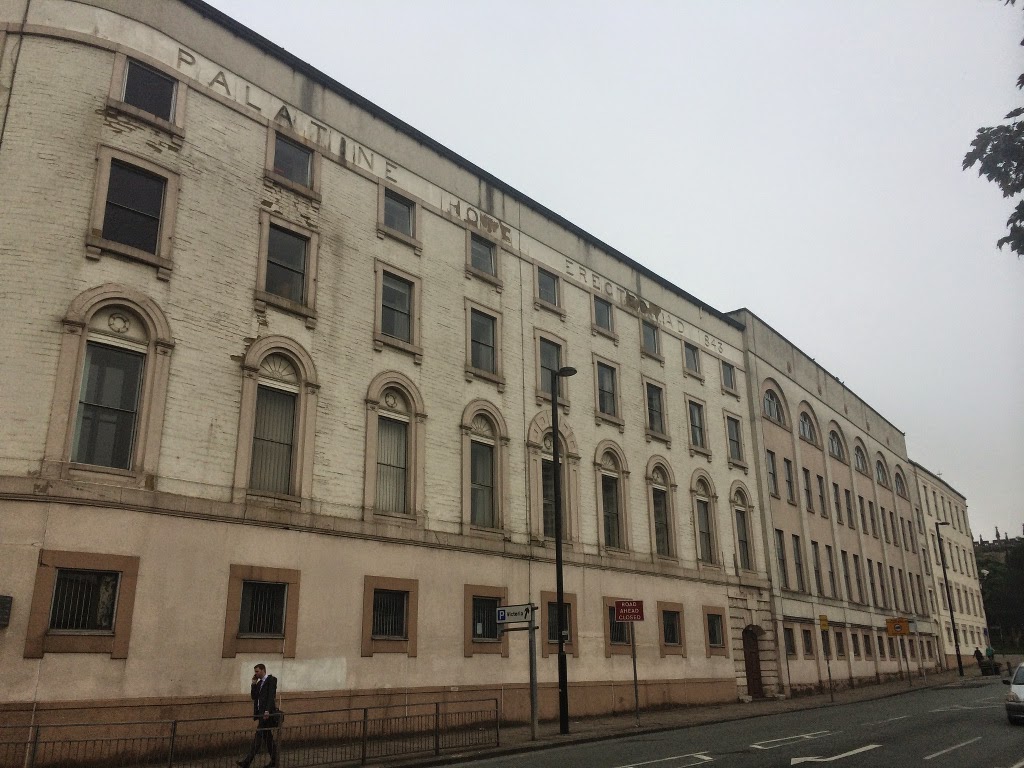 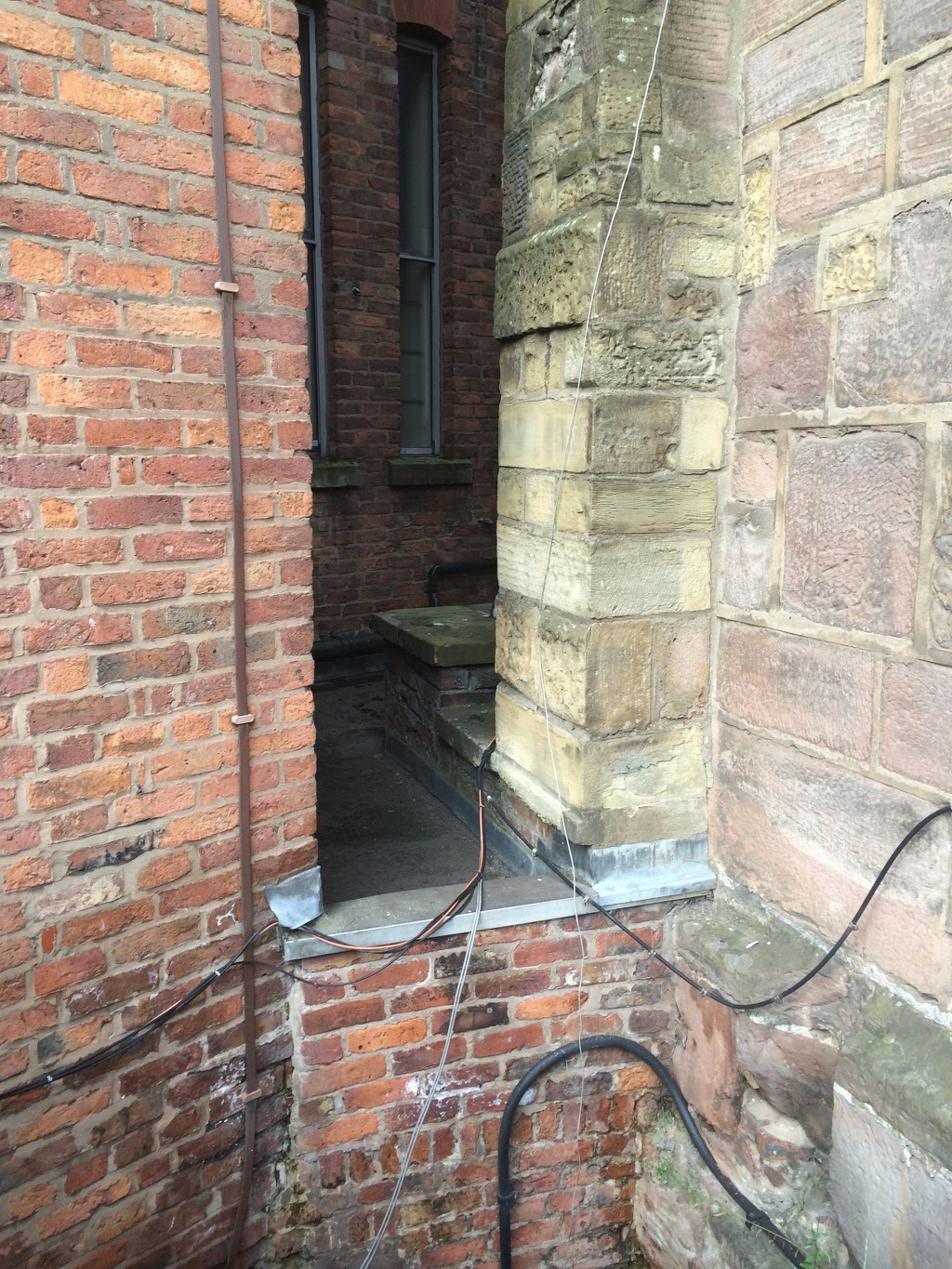 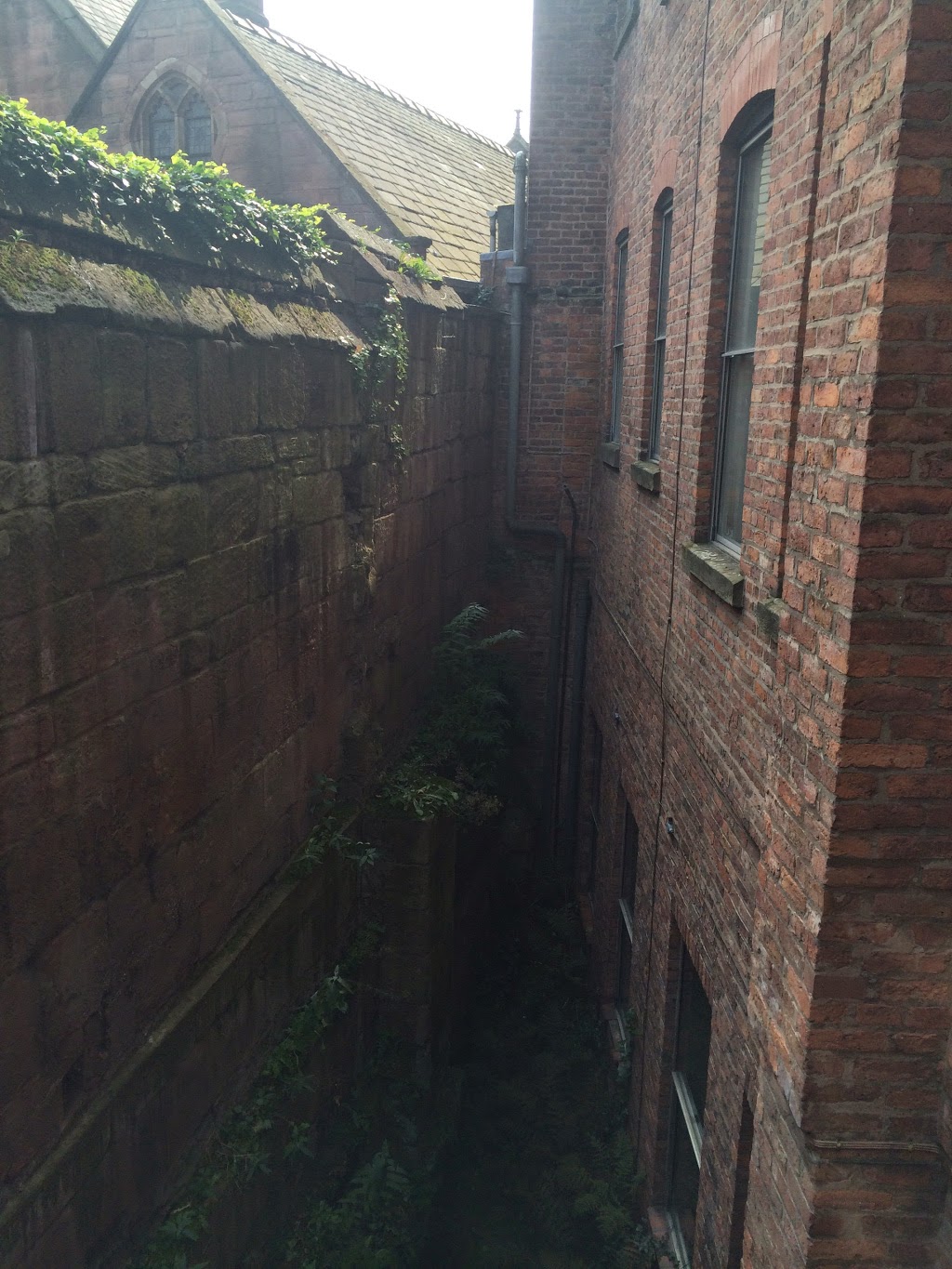 Putting a hotel next to a school created problems, and Chetham’s was forced to build enormous wooden hoardings to prevent hotel patrons from overlooking the school. By 1911 the Palatine Hotel had closed for business, and the buildings were converted for retail use. Since then, the buildings have undergone many changes to accommodate a variety of different uses and have been stripped externally and internally of their original architectural features. All the original glazing and all the chimney stacks have been removed. 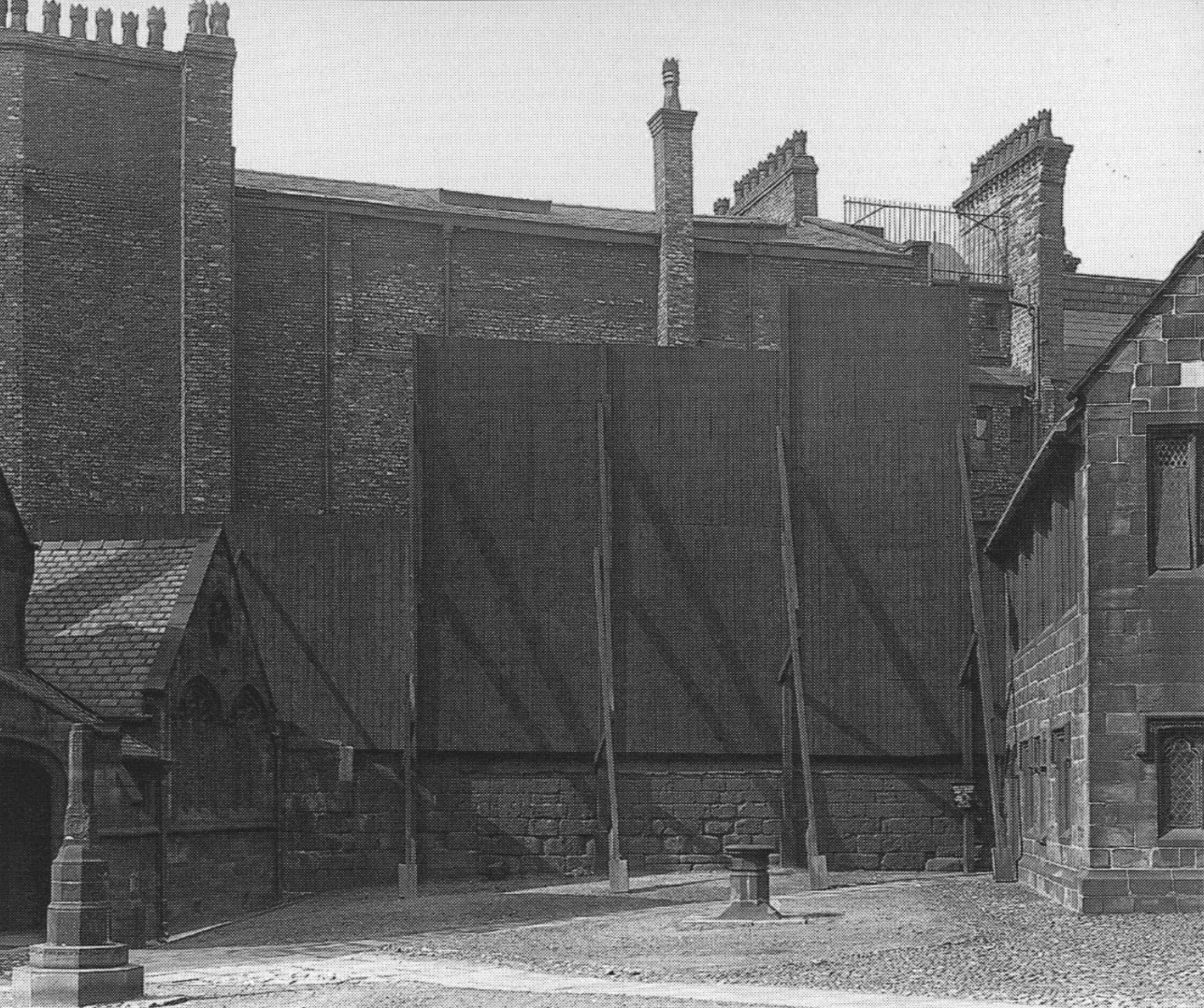 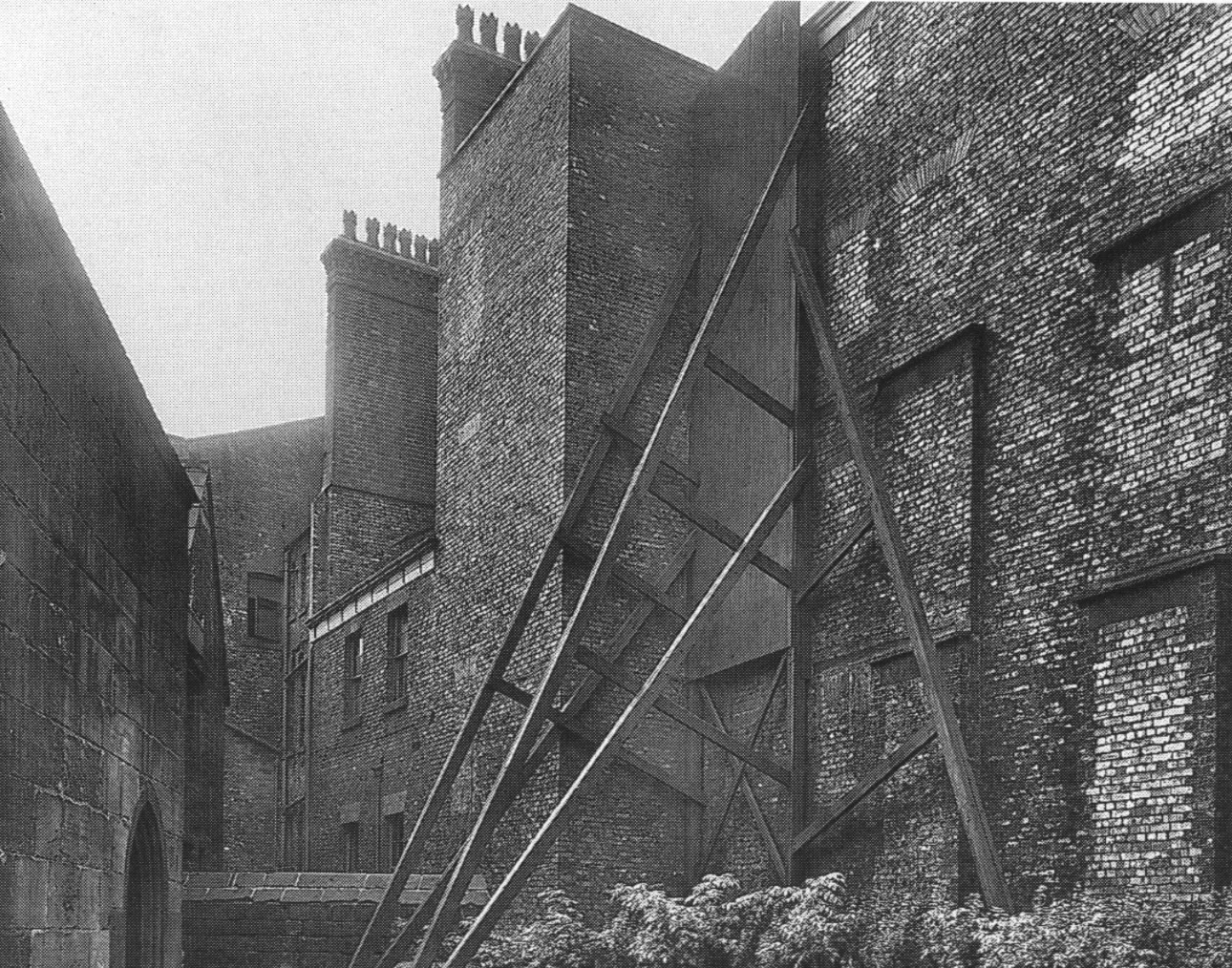 The Palatine buildings were acquired by the Trustees of Chetham’s Charity in 1969 and were intended to provide accommodation and school rooms for the newly founded Chetham’s School of Music. They were converted by the architects Thomas Worthington and Son as a temporary refurbishment intended to last no more than ten years. The buildings were completely unsuitable for their new purpose: they had no sound-proofing and they provided very poor residential space. They were also extraordinarily expensive to maintain. The basements regularly flooded and the roof leaked. But Chetham’s made use of them not for the ten years they imagined but for over forty years until they were eventually vacated in favour of the new school building, opposite Victoria Station, which opened in 2013. In 2009 Chetham’s trustees put the Palatine buildings up for sale to see if a developer or builder would take them on, but the proposed sale attracted no interest. They are now completely empty and are unsustainable, and are scheduled for demolition in the next twelve months.

We recognise that taking down the Palatine buildings is only justified if the results are a significant improvement on what was there before, and in this instance there is no question that the demolition has two huge positive outcomes. Firstly it opens up what is arguably the most important archaeological site in the city: beneath the Palatine buildings lie the House of Correction, the great tithe barn, the inner ditch and the castle, and some of the lost buildings of the medieval town. Our aim is to ensure that by removing the Palatine buildings we are able to open up the archeology that remains beneath them to the community. We have been in discussions with archaeologists for some time to make sure that these sites are sensitively and appropriately investigated. Secondly, their removal opens up the medieval College House to Manchester and Salford, a view that has been hidden since the 1840s. We have no wish to open up the site to improve our own view, which will be of a car park, and, if proposed developments take place, two large tower blocks, but we do think that opening up one of Manchester’s very few remaining medieval buildings to public view is important. By taking down Palatine we are able to open up the medieval College House and the Library as a proper visitor attraction, and we are working in consultation with the City, the Cathedral and architects to put this site to the best possible use. We are currently in the process of making an application for a Heritage Lottery Fund grant to update and improve the medieval buildings as well as to restore and adapt the Grade II-listed nineteenth-century Alfred Waterhouse building which is currently hidden from public view by Palatine. It is our intention to create new public space as well as improving accessibility to the medieval buildings, and we welcome constructive suggestions for future developments. We are also working with artists-in-residence as well as photography students from Bolton University on a project to properly record the building and document the regeneration of the site.

We recognise that the heritage of the site on which Chetham’s stands is of great significance and is valued by many, and it is our full intention to take each decision about its future intelligently and sensitively. Naturally, the loss of an early nineteenth-century railway hotel is regretted by all who have worked in and around it as well as by members of the wider community and those who care about its architectural importance, and we understand that any decisions made regarding its future will have detractors as well as supporters. We are, however, confident not only that all possibilities for the realistic survival of Palatine have been exhausted, but that the decision to demolish it will make way for developments and improvements which will have a very positive effect on this part of the city and all who love and appreciate it.