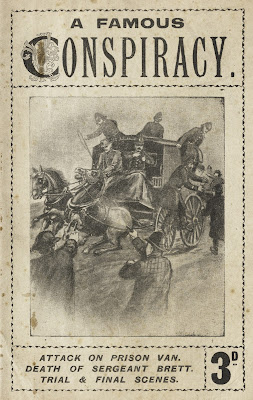 On this day 145 years ago, three Irishmen who came to be known as the Manchester Martyrs were hanged outside Salford Gaol. William Philip Allen, Michael Larkin and Michael O’Brien were executed for the murder of a police officer who was guarding leaders of the Irish Republican Brotherhood to which they belonged.

The definitive story of the Fenian protests and the Manchester Outrages, as they became known, is told in Joseph O’Neill’s recent work The Manchester Martyrs, but the events have attracted much attention over the years, including this ‘penny dreadful’ published by the Daisy Bank Printing and Publishing Company in 1909.

The Daisy Bank Printing Company was owned by Jesse Pemberton, who brought out about forty titles at the beginning of the C20th, mostly on magic, sport, and true crime. This slim volume is one of only two items of local interest, the other being Charles Bloomfield’s police autobiography of his career in Manchester, the splendidly titled Dredging a City’s Filth.

For more information on the Daisy Bank Press, you could do worse than consult Librarian Michael Powell’s definitive study ‘Do the Dead Talk?’, in Worlds of Print: Diversity in the Book Trade, published in 2006 by Oak Knoll Press and available to view here at the Library.