A fresh look at the Belle Vue project 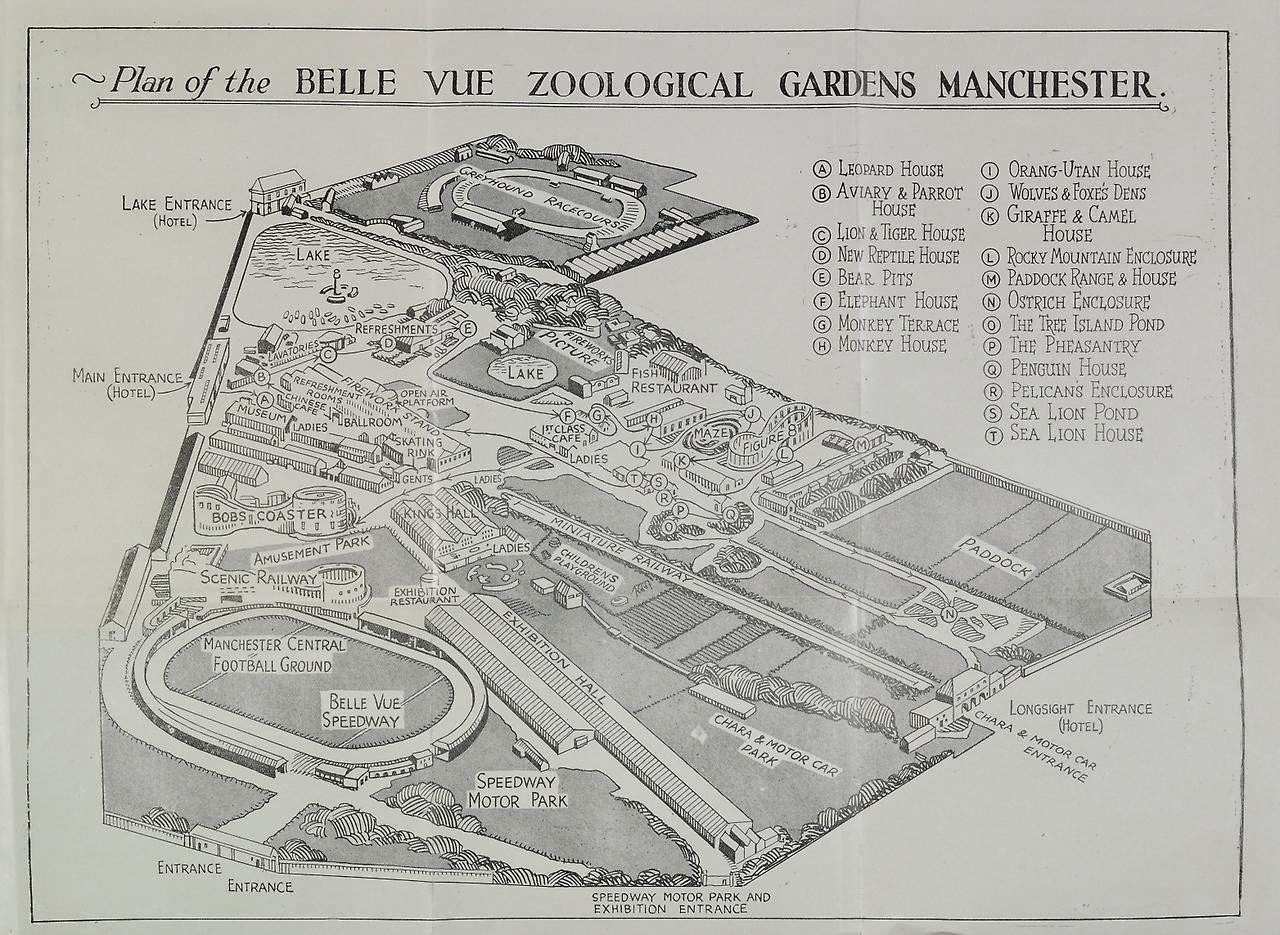 Today we are delighted to introduce another of our work placement students, Courtney Stickland of the University of Manchester, who is working alongside Kathy on the Belle Vue Project funded by the Esmée Fairbairn Collections Fund. Courtney writes:

“I studied for my undergraduate degree in History and Human Geography at the University of British Columbia (Vancouver, Canada), during which I spent a term studying abroad at the University of Manchester. I fell in love with the city, returned to pursue my Master’s degree, and am now  on a work placement for UoM’s MA (Modern British) History program, working on the Belle Vue Gardens Project at Chetham’s Library.

When I arrived at Chetham’s for the first time I was amazed by the building and the collection – so much so that I accidentally ended up on a mini-tour with guide Jess for fifteen minutes before eventually managing to pipe up that I was meant to be helping out in the office and was not a tourist. After a stream of apologies and nervous laughter, I got down to business with Chetham’s Cataloguing Librarian Kathy Whalen, and was introduced to the Belle Vue Gardens Project.

Obviously, being from Canada, I had never heard of Belle Vue, but was immediately interested in this place that was so prominent in Mancunian life and memory for nearly 150 years. Over the next few days I began to tell my course mates about the placement, and they all commented how their parents and grandparents used to go there, confirming to me how big a deal Belle Vue had once been.

Given my background in geography, I quickly took to Google maps with old Belle Vue guidemaps in hand to get a spatial image of the place in my mind but with no luck: few remnants of the area’s heyday as an entertainment mecca remain. The trapezoidal site from the guide maps of years past is roughly recognisable, bounded by Hyde Road, the A6010 and Kirkmanshulme Road, and the greyhound stadium is still there, but beyond that Belle Vue has been completely transformed into commercial and residential space. 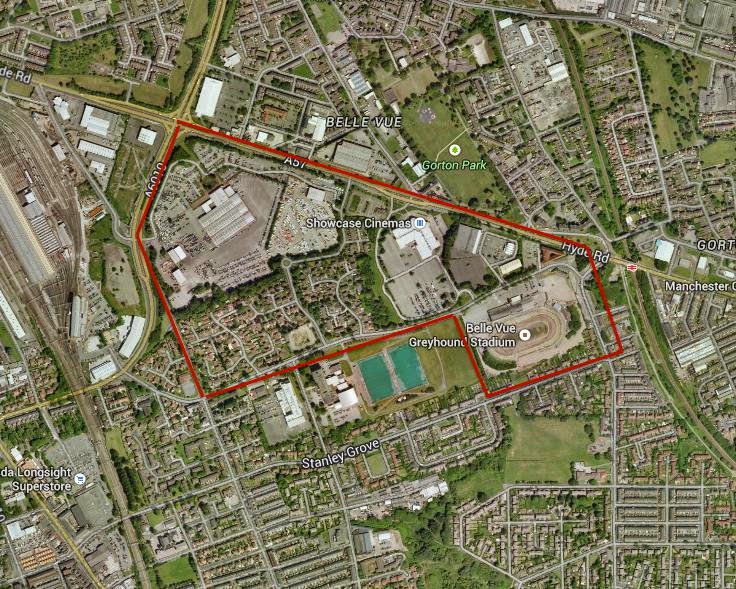 While my geographical side was disheartened by the lack of built heritage to scour (who doesn’t love before and after photos of old buildings?), I was consoled by the wealth of visual and textual material in the Belle Vue Collection from which I can rebuild an image of the park’s past. And thanks to the toil of previous volunteers on the Belle Vue Gardens Project, I have a massive amount of material available to work with, much of it already digitised. My work placement partner Jacob and I are continuing to help with this important task of digitising and organising the Omeka database, but also in opening up the collection to the public, particularly those who experienced Belle Vue first hand and remember its glory days. In order to do this, Jacob and I are simultaneously uploading material from Omeka and the library’s holdings to a variety of social media websites, including the existing Chetham’s Library Flickr and Twitter, as well as a Tumblr page specifically for the Belle Vue Gardens Project which I have created. 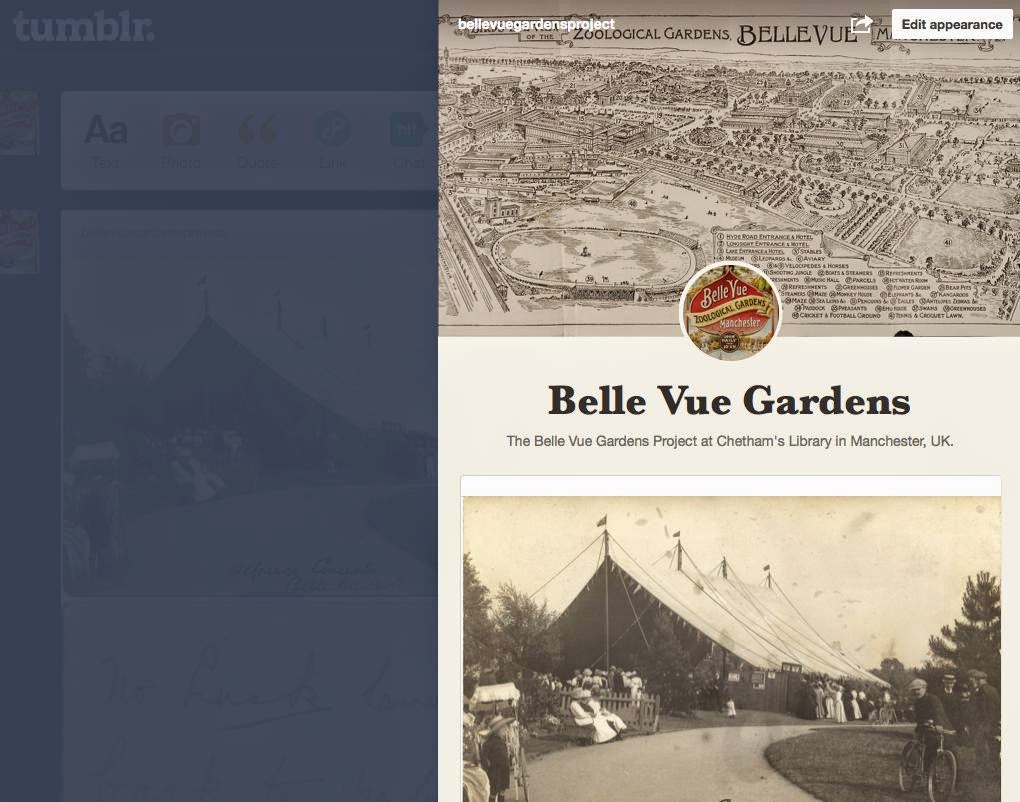 View of the dashboard of the bellevuegardensproject Tumblr dashboard, already making use of the park’s great visual materials

I decided that Tumblr would be a beneficial social media platform for dispersing the Belle Vue Collection because of my own personal experience with the site. Amongst the sea of hipster pictures and fan posts about Harry Potter, one can find a variety of history-related accounts that share interesting information about the past, usually highlighting the humorous and bizarre bits of history that don’t typically make it into textbooks (some of my personal favourites are Oxford University Press, This Day in History and Mad History). Furthermore, like Flickr, the microblogging platform of Tumblr favours visual material – a perfect outlet for the myriad of striking images contained in the Belle Vue Collection. By using relevant hashtags on uploaded images, a wider range of users can be introduced to Belle Vue who would otherwise not know about its existence or its interaction with certain aspects of history. For example, one of the site’s first visitors was a Davy Jones fan page which reblogged a photo set of Jones, Pelé and Gracie Fields casting their hand and foot prints in the 1960s for Belle Vue’s Wall of Fame, subsequently sharing the Belle Vue page with all of their followers and increasing awareness of the park’s history of celebrity appearances. I am hoping that by highlighting the visual history of Belle Vue, I can lure new audiences to the Belle Vue Collection (using links to the Omeka database, the Chetham’s Library blog and Flickr page), particularly local Tumblr users who are unfamiliar with the park or the Library’s collections.

Some challenges I am anticipating with the Tumblr page are maintaining a regular posting schedule, striking an even balance of content and establishing a visible web presence. Thankfully the Tumblr platform includes a queueing option, so I can upload and schedule a number of posts on my days in Chetham’s. In regards to content, I will need to suppress my intense interest in nineteenth-century British history and include material across the park’s long history, but also use a wide array of sources, including photos, maps, pamphlets, newspaper articles, videos and ephemera. Lastly, increasing traffic to the site will be largely reliant on effective tagging of posted material (it was jokingly suggested that I tag everything with ‘baby animals’ to increase traffic, though this will definitely be employed in zoo-related posts) and advertising the Tumblr through the Chetham’s Library Twitter and Facebook accounts.

I am looking forward to working with the collection and staff at Chetham’s in the upcoming months, and learning more about Manchester’s local history!”

To search for digitised Belle Vue items, please go to our archival and manuscript catalogue. The search ‘Belle Vue’ will bring up a large number of hits; you could also try searches such as ‘speedway’ ‘monkeys’ or ‘boxing’.