A History of Manchester Fiction 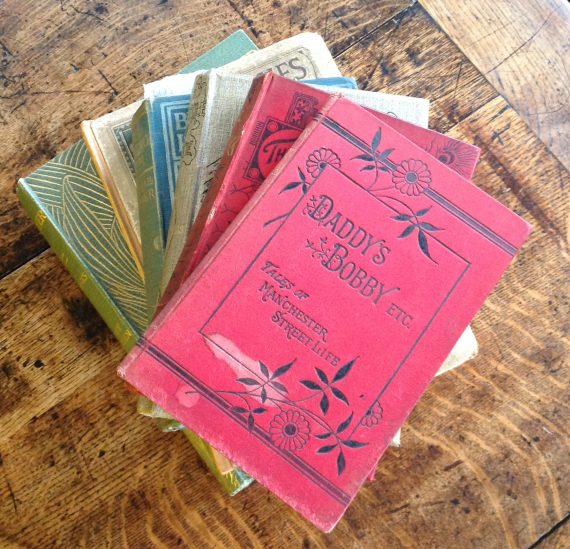 We are thrilled to have acquired a collection of North West fiction that was put together by the scholar and bibliophile Eddie Cass.

Cass collected books on many subjects – coal mining, canals, folk-lore, cookery, all of which were connected with his love of and interest in the history of the North West. Fictional accounts of the North West remained one of his main concerns. His particular interest was in the history of the working class and its active and passive responses to literature – in other words how members of the working classes thought of their experiences as expressed in novels and poems. What did the middle class, the members of which produced many C19th novels set in the north, think of the working class and of the industrial system which had produced them?

The collection comprises nearly three-hundred titles beginning with novels of national significance, such as Harriet Martineu’s 1832 work The Strike, and continuing up until 1971 with Gillian Avery’s children’s work A Likely Lad. Most date from the second half of the C19th. The novels can be approached in a number of ways – for what they tell us about life in the North West, and for what they say about the book trade and the publication and distribution of fiction in the Victorian age. For a library that has specialised in the history of Manchester, they have a particular value for what they tell us about the shock city of the Victorian era. How did those writers that were of lesser significance than Dickens or Gaskell come to terms with Manchester?

1. Novels set in Lancashire mill towns outside of Manchester, which in some way celebrate the local culture and community and reject life in the city. The city is seen as over sophisticated and sinful, violent and uncultured. In a weird anticipation of Brexit fever, the city, and we mean Manchester, is described as full of immigrants – Jews, Irish and Germans – who have diluted local dialect and local identity. Manchester as a babel of language and dehumanising poverty. 2. Dialect novels, where the mill is depicted as the centre of village life, and which utterly reject the city and political radicalism. Published mainly in Manchester between 1860 and 1890, and often in magazines, these works revive Lancashire customs, folk-lore and folk-speech, preserving the values and history of a community. The city is seen as threatening a way of life. Often the stories depict a Lancashire man wandering around and testing everywhere against the values of Lancashire. 3. Late Victorian novels which challenge the image of Manchester as polluted, overcrowded, poor and which associate it with vitality, energy, productivity and opportunity. The city as a place of moral and material progress. 4. Novels which explore and describe conditions of urban poverty from a distinctly religious perspective. The city is seen as a place of degradation and suffering, with poverty existing in an underworld. Often very puritanical and moral, they depict stock images of drunkenness, prostitution, and godlessness, centred on the orphaned or abandoned child, who is seen as a figure of innocence. Manchester is depicted as a city of hell or chaos. But all can be redeemed by accepting Christianity and being plucked from the city and taken to a place of refuge. 5. Evolution of the socialist novel post 1880. A series of books that saw the individual labour as a victim of an inhuman economic system outside his or her control. Workers were exploited by a factory system and the idea that one could move from poverty to riches was rejected and reverted. This is a socialist labour history, more radical in terms of its politics and in terms of the style and format of fiction.