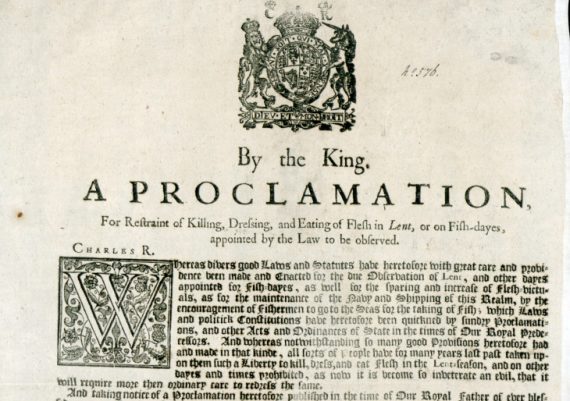 Most of us probably harbour an impression that with the accession of Charles II the age of the Puritan was over for good or ill. Theatres re-opened, Christmas was brought back, and Charles himself seems to represent a less than morally meticulous approach with his mistresses and well attested appetite for oranges. That impression is perhaps partial at best; his administration could be pretty exacting when it came to enforcing a suitably abstemious Lent, and the enforcement of other ‘fish days’. We visit a Proclamation of 1660 (see the whole thing here) to see if anything fishy was going on. The motivation has a topical ring for 2021 in one aspect: the proclamation claims to be acting for the benefit of the fishing industry. ‘the encouragement of Fishermen to go the Seas for the taking of Fish’. There is a reason more strictly to do with Lenten observance: ‘all sorts of people have for many years last past taken up on them such a Liberty to kill, dress and eat Flesh in the Lent-season, and on other dayes and times prohibited, as now it is become so inveterate and evil, that it will require more than ordinary care to redress the same’.

The rot stops now seems to be the main theme, to bring about: ‘the Reformation of so great and growng an evil, which is so great an Enemy to the Plenty of this Our Kingdome.’ A ‘strict conformity’ to the ordinance is required. The potential financial penalties are serious enough, and rather than risk having to prosecute and raise fines after the event, ‘all Inholders, Keepers of Ordinary Tabels, Cooks, Butchers, Victuallers, Alehouse-keepers, and Taverners’ within London or Westminster will have to find two ‘Sureties’ prepared to put up twenty pounds each, and themselves put up forty-pound bond. Outside the capital, ten and twenty pound bonds are similarly to be put up.

The more jaded among you may wonder whether there is not some slight element of exchequer greed going on here; at best this seems a forced loan. The signs are small, but perhaps telling: ‘… the Principal in Forty pounds, and their Sureties in in Twenty pounds apiece to Our Use.’ The final two words may make youir average Inholder or Keeper of an Ordinary Table a little suspicious.

So no going out for a steak – what about a home cooked one?

It seems not, or not unless you can get the bishop to give you a dispensation, and even he is being told not to. You need to stick to fish or you’ll feel the weight of royal justice.

So, having understood all this and decided obedience is probably in your best interests, what about nipping out for a fish supper? It seems not.

The whole body of Inholders, keepers of Ordinary Tables, etc. are under pain of punishment ‘not to make any supper for any person or persons upon Friday nights, either in Lent or out of Lent’. Not frying tonight.

A good deal more follows; it seems an ill wind. It doesn’t even help the fishmongers, who might be expecting a price bonus for their goods as meat is off the menu. They are told in no uncertain terms that the Crown will be after them if they raise their prices.

We wish all readers the Lent they would wish for themselves. This Proclamation is one of over 3,000 single-sheet items collected by James Orchard Halliwell Phillipps, and available in digital form directly from our catalogue.