A Weaving of Words 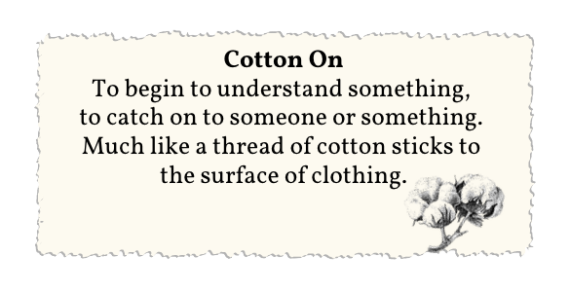 Inspiration from the early textile industry

Chetham’s Library owes its very existence to the popularity of fustian, a coarse cloth of which the warp was linen and the weft was cotton. It was from trade in this fabric that Humphrey Chetham (1580-1653) made the fortune which was eventually invested in the school and library in pursuit of his mission to ‘overcome poverty and cure ignorance.’ It is unlikely that Humphrey himself ever wore this coarse fabric. The word ‘fustian’ in his lifetime had also come to be used figuratively to refer to pompous, inflated or pretentious writing or speech because this cloth type was often used as padding – hence, purposeless words were fustian. 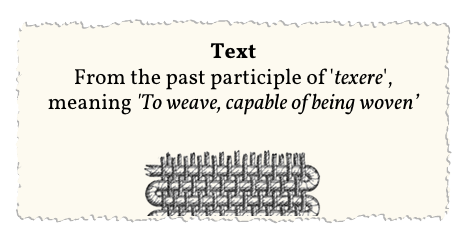 Textiles and Text share the same Latin origin: the verb texere which means ‘to weave’. It is possible that textiles could have been a form of language even before the advent of writing. What is certain is that some of the language we use today was inspired by the domestic and later the mechanised manufacture of textiles. We follow the thread of an argument, spin a yarn, become entangled in a web, unravel a mystery. An odd or dishonest person may be warped, politicians may be heckled for pursuing fine-drawn theories, or even home-spun arguments. Weaving and unravelling are metaphors for synthesis and analysis. I could go on spinning this out, or decide to wind it all up. 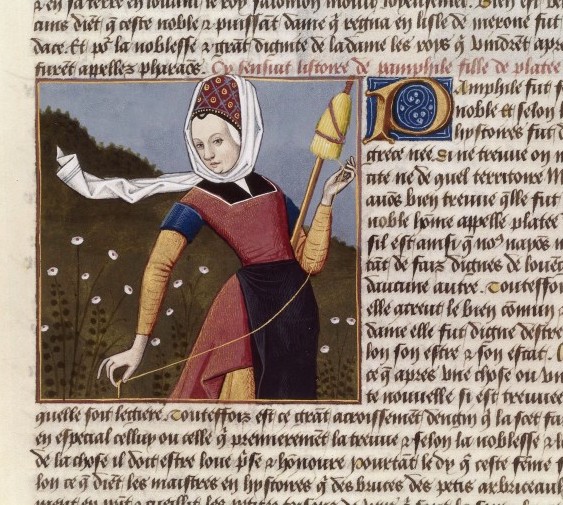 The two main processes in the domestic manufacture of cloth, spinning and weaving, were a source of metaphor for centuries. Shakespeare’s Falstaff knows that ‘life is a shuttle,’ and in Twelfth Night Sir Andrew Aguecheek’s hair hangs ‘like flax on a distaff.’ Before mechanisation spinning was a woman’s occupation; even in the Book of Proverbs ‘the virtuous woman seeketh wool and flax … she layeth her hands to the spindle, and her hands hold the distaff.’ In heraldry, the distaff side outlines the female lineage of the family.

As other processes were developed and mechanised for the production of wool and cotton, so our language continued to be enriched. The importance of the textile industry in Manchester, or Cottonopolis as it became known in the nineteenth century, is reflected in the number (over 500) and quality of books and pamphlets about textiles held in the library.

Just one striking example shows the interaction of textiles with book-art as well as language. ‘Concerning Cotton 1791-1920’, published in 1920. It is a lavish Art Deco production, containing brochures for each of the subsidiary companies, and it has been suggested that the fairy motifs could be by the celebrated illustrator Arthur Rackham. 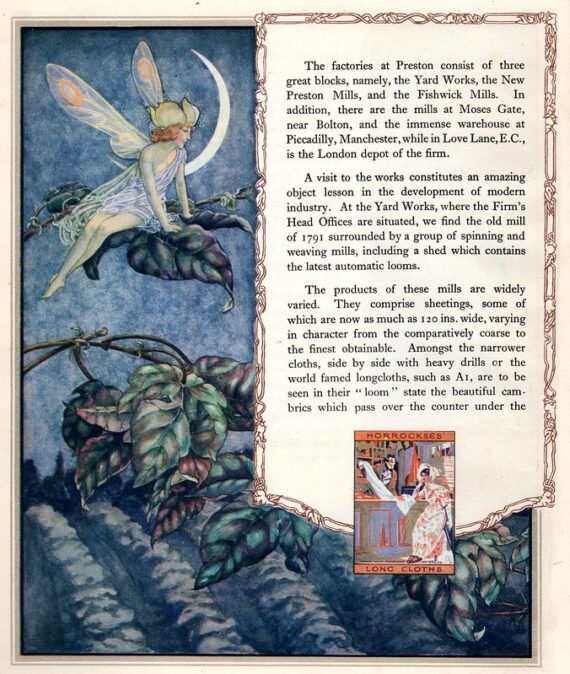 The language of textiles has been and still is used to describe human characteristics. If yarn was twitty or full of twits it meant it had faults such as knots which would make the weaving process more difficult. When fabric was being washed or soaked, it was beaten with a wooden board or bat. This rhythmic action might create drowsiness and a sense of going batty. The waste bobbins used in mills came to indicate something of no value. Doffing one’s cap originally meant taking the bobbins off their spools on a spinning frame.

A fault which could cause serious problems in the weaving process occurred when a collection of tightly packed broken fibres congregated in clumps in the cotton yarn. When twisted, a crackling sound could be heard. Someone a bit odd or unpredictable was thus known as crackers. When woven cloth has gone through the wet processes it needs to be tentered, or stretched, by means of hooks to prevent any shrinkage and to maintain a uniform width. To be on tenterhooks suggests a state of anxiety or apprehension. 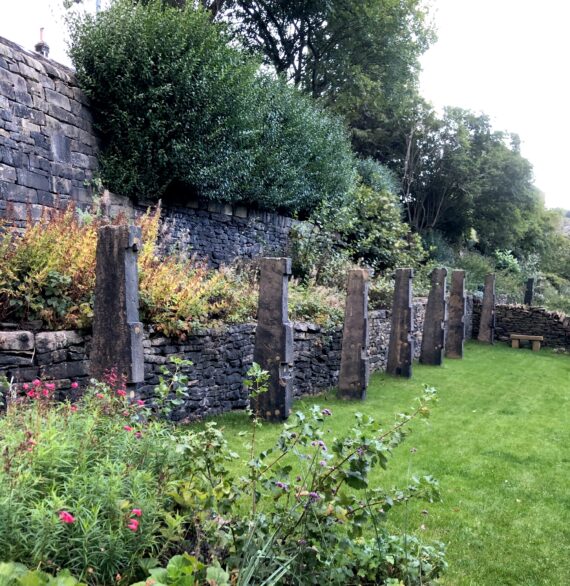 In the north of England, the fag end was the end of a piece of cloth. Only later was it applied to the butt of a cigarette. In the Yorkshire woollen industry, a medley was produced by dyeing several batches of raw wool in different colours, then spinning them into yarn and weaving them. Later, fettlers were the men who helped to ensure that the huge and thunderous woollen and worsted carding machines were clear of fibres and grease and operated to maximum efficiency. The aim was for all the equipment to be in fine fettle.

In the 19th century, South American wool clip was imported from South America to be sold in Bradford. Market traders would claim that consignments of Uruguayan (Montevideo) wools always contained ‘full Montevideo bales.’ Over the years this became ‘full Monty bales’ and eventually ‘the full Monty.’

The use of textile language as metaphor continued to expand and develop. The warp and the weft (or woof), referring to the weaving together of horizontal and vertical yarn, has come to signify the building blocks or components of life or of an argument. More mundanely, losing the thread, cottoning on, and lining the pocket, are all self-explanatory terms. Dyed in the wool emphasises that cloth dyed before weaving retains its deep colour and is superior to the wool that is dyed in the piece. 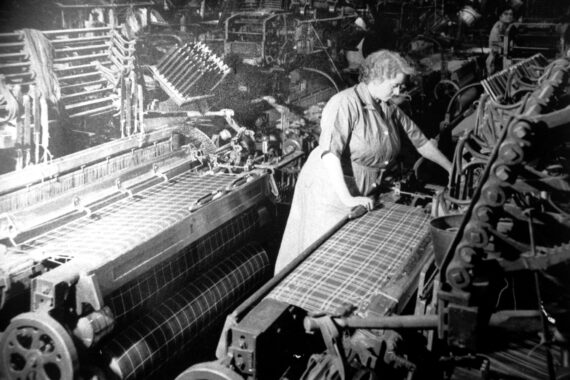 The word shoddy had different meanings in different wool-producing areas. In the West Yorkshire woollen district, it was the fibrous waste that was blended with new wool to make heavy goods such as overcoats. Elsewhere, it described the dusty mixed fibres that gathered under carding machines.

Eventually, it was used to describe any product of inferior quality. During the 1950s the Yorkshire based Association of Reclaimed Fibre Manufacturers attempted to drop the word shoddy altogether but could not come up with a replacement term.

Moving on from such examples of derogatory terms, the English language is also rich in words for the fabrics themselves. From the 17th to the 19th century in particular, an enormous number of fabrics were imported to Britain – jersey from Jersey, cashmere from Kashmir, jeans from Genoa, denim from Nîmes, muslin from Mussolo in Iraq, damask from Damascus, cambric from Cambray, and many more. But as well as importing textile names, Britain also contributed them to the rest of the world. Cotton goods and household linen are to this day known collectively in Australia, New Zealand and South Africa, simply as Manchester.

As a part of our current exhibition A Weaving of Words,visitors have enjoyed exploring the library looking for tags with various textile related words and phrases, and many have been surprised by their origins. It makes one wonder: which of our contemporary phrases will be studied by future generations?