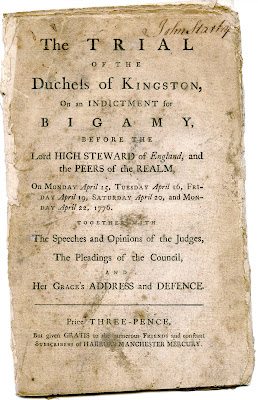 This extremely rare, possibly unique, example of local print culture was bought from the bookseller Christian White of Modern First Editions, Ilkley. The work shows that the fascination for celebrity culture is nothing new and that nothing sells so well as a court case involving sex, money and the wealthy.

The thirty-two page pamphlet was published by Joseph Harrop, printer and proprietor of the Manchester Mercury soon after the court case. Sold for three pence, this was also given free to subscribers of Harrop’s newspaper, the 1770s equivalent to the free supplements which accompany today’s gossip magazines.

The tale, a story of bigamy and perjury among the aristocracy, gripped the nation.

In 1744 Elizabeth Chudleigh (1720-1788), maid of honour to Augusta, Princess of Wales, married a Royal Navy Officer, Augustus John Hervey. The pair decided to keep the marriage a secret so Elizabeth could retain her post at court. The marriage, however, failed and the couple separated. Hervey went back to sea and Elizabeth became the mistress of Evelyn Pierrepont, 2nd Duke of Kingston.

After some time, Hervey’s prospects improved when he succeeded his brother as heir to the Earl of Bristol. Kingston, however, was the better catch. In 1769 Hervey and Elizabeth colluded to conceal evidence of their wedding. Elizabeth committed perjury in the consistory court, but was declared a spinster and married the Duke within a month.

In 1773 Kingston died, leaving her all his property on condition that she remained a widow. In March 1775 Hervey succeeded his brother as Earl of Bristol. Elizabeth’s marriage to Hervey was declared legitimate, despite her denials, and she was therefore legally Countess of Bristol.

The Duchess was forced to return to England to defend herself against a charge of bigamy. The trial, in Westminster Hall before the House of Lords, was a sensation and tickets for the public gallery were eagerly sought. After hearing the evidence, all 119 Lords took it in turn to deliver their verdict. Each pronounced her guilty.

Elizabeth left the country in a hurry, but retained her inheritance from Kingston. For a while she lived in Calais before moving to the court of Catherine the Great in St Petersburg. She continued to style herself Duchess of Kingston until her death in Paris in 1788.