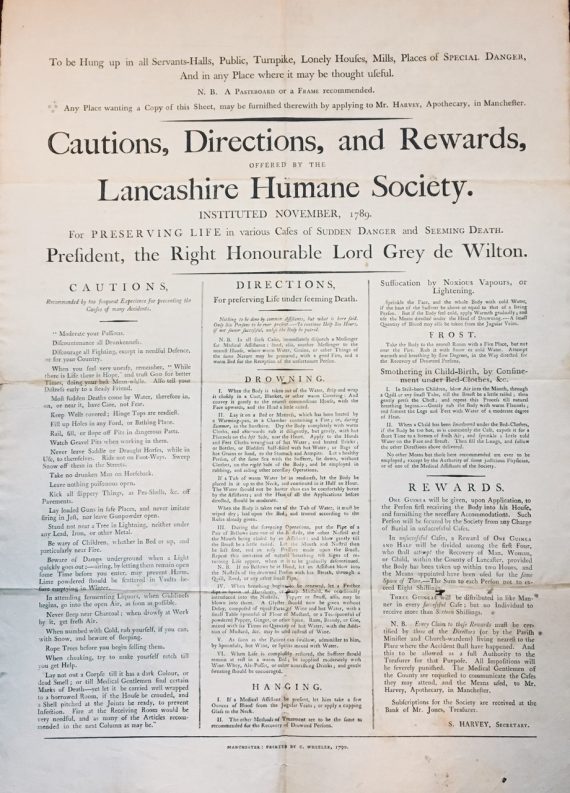 Every so often the Library is compelled to acquire a book or a manuscript because it is so unusual and quite unlike anything else that we have. This large broadside, dated 1790 and measuring 78×48 cm, entitled ‘Cautions, Directions and rewards of the Lancashire Humane Society’, is a perfect example. The Library has no other works produced by this Society but we do collect broadsides, single-sheet posters, public, notices etc., and this one is hard to beat. So, when it was offered for sale by a bookseller in Australia we had no choice but to buy it!

The Society was instituted in November 1789, fifteen years after the Royal Humane Society had been founded in London. The London Society was founded by two medics who were keen to promote techniques of resuscitation. It became apparent that people were putting their own lives in danger rescuing others, and awards were given in recognition of these acts of bravery. The Lancashire Humane Society was established under the Presidency of the Earl of Wilton, and was set up largely due to the work of Thomas Butterworth Bayley, a prison reformer, one of the founders of the Literary and Philosophical Society and later founder and chair of Manchester’s Board of Health.

The Lancashire Society adopted the same ideas as the London body, with advice on how to prevent accidents, directions as to how to resuscitate people who had suffered drowning, as well as rewards offered to the person or persons who attempted to resuscitate any man woman or child within the county of Lancaster.

Some of the advice for avoiding accidents may seem pretty obvious –

‘Discourage all fighting, except in needful defence or for your country’

‘Take no drunken man or horseback’

‘Rope trees before you begin felling them’

– but others are more amusing –

‘Be wary of children, whether in bed or up, and particularly near fire’

‘Kick all slippery things as pea-shells, &c off pavements’

‘Lay not out a corpse till it has a dark Colour, or dead smell’…

The Lancashire Humane Society was short-lived although the London Society, now the Royal Humane Society, survives to this day. Only one of the proposed annual journals of the Lancashire Humane Society seems to have been published and it survives in copies in the British Library and in the National Library of Medicine in the United States. The large broadside that we acquired is almost as rare. Despite being printed in large numbers, ‘To be Hung up in all servants-halls, public turnpike, lonely houses, mills, places of special danger,’ few copies of the the poster have survived. Our new acquisition can be added to a copy in a National Trust property and in the Library Company Philadelphia, thus making three copies in libraries worldwide.