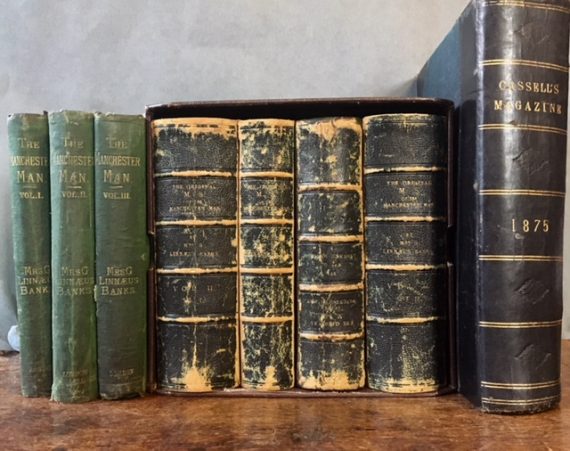 We have recently acquired a copy of the first book printing of The Manchester Man by Isabella Banks, also known as Mrs G. Linnaeus Banks, or simply Mrs Banks. The three-volume book was published in London in 1876 by Hurst and Blackett, and completes the Library’s collection of the full publishing history of this most famous of Manchester novels.

As well as the new addition, we hold the first publication of the story in serial form in Cassell’s Family Magazine for 1875, as well as the four volume author’s manuscript copy and many other editions including the most popular version, Abel Heywood’s illustrated edition of 1895.   The novel has lent itself to a number of Manchester landmarks, including pubs named after two of the characters from the novel, Jabez Clegg and Joshua Brooks, and the publisher Abel Heywood. More recently the First Street development near HOME features Mrs Banks as one of five creative people people ‘who have made a significant contribution to Manchester through sheer talent, philanthropy and love for their city.’ A nice idea, although one wonders if anyone still reads the book today: Mrs Gaskell was a better writer and Anthony Burgess is better known. But like every other Manchester writer, their misfortune is that someone else came up with the title Manchester Man, a title that couldn’t ever really be bettered.

Perhaps one of the most (in)famous of Manchester men, the late Anthony H. Wilson, known to many as ‘Mr Manchester’, has an epitaph from the book on his gravestone. It reads ‘Mutability is the epitaph of worlds/ Change alone is changeless/ People drop out of the history of a life as of a land though their work or their influence remains’.