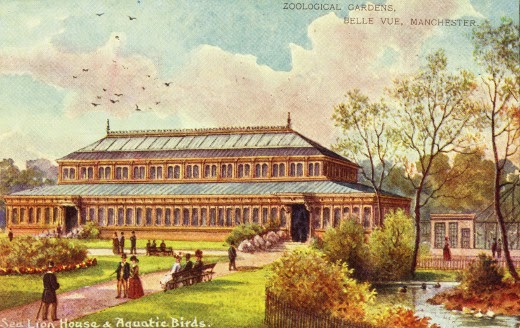 To coincide with the Manchester Histories Festival, we are excited to announce the publication of a new ebook on the history of Belle Vue Zoological Gardens.

Written nearly ninety years ago by George Jennison, grandson of the founder John Jennison, but remaining unpublished until now, the book has been edited and annotated by Zoe Willock as part of her history degree at MMU. The book was written when the Jennison family gave up its concern in the famous zoo and amusement park, and was intended to represent the official history of the site, but George Jennison insisted that publication be delayed for at least twenty-five years to avoid upsetting his family.

The book is a tribute to Zoe’s hard work and dedication to her subject, and is beautifully illustrated with material from the Belle Vue collection at Chetham’s Library as well as from other repositories. The full title of the work is The Making and Growth of the Famous Zoological Gardens, Belle Vue, Manchester, and the History of its Competitors: A Century of Lancashire Open-Air Amusements 1825-1925.