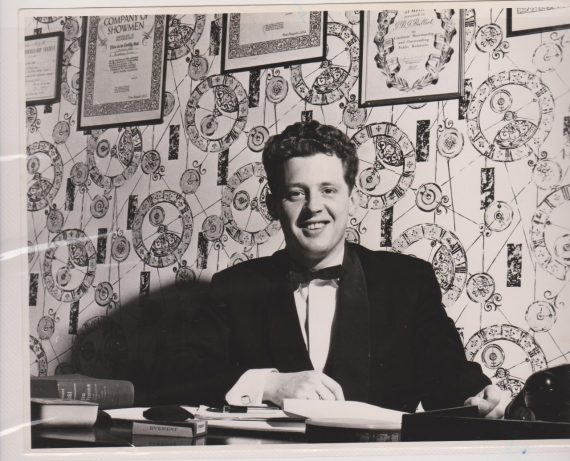 We recently received the following from Simon Bullock, who had been having a look at our ‘Virtual Belle Vue’ website :

“My father, John D J Bullock originally from Burnage in Manchester, joined Belle Vue in 1959 as Assistant Business Development Manager having spent four years as an assistant manager with ABC Cinemas in Manchester. In May 1962 he was appointed Manager of the New Elizabethan Ballroom where he promoted and ran the “Top Ten Dance Club” along with famous DJs and pop groups during that period. I understand he would have worked with senior management including Mr W M Marshall and Sir Leslie Joseph when the organisation was owned by the Forte group. My father left Belle Vue Manchester during the mid 1960s when he was appointed as Entertainments & Publicity Manager based at the Shrewsbury Music Hall where he met and married my mother and began to build his career in local government. During his time in Shrewsbury, he brought the Beatles to the music hall as well as the “Top Ten Dance Club”. His career finished as Director of Leisure & Tourism for Southampton City Council where, at the young age of 53, he died in service from cancer.”

Simon also sent us these photos of his father in his office at Belle Vue and the press cuttings issued at the time of his appointment as manager of the New Elizabethan Ballroom at the age of 27.

The above cutting reveals that during his time as an assistant cinema manager, he had arranged for a girl to have a bubble bath in a shop window in Eccles to publicise the film ‘The Opposite Sex’. As well as giving the film the intended publicity, the stunt also brought traffic to a standstill on the adjacent road !

If anyone knew Simon’s father or worked in the New Elizabethan between 1962 and the mid 1960s, Simon would like to hear from you. Please get in touch through us via e-mail : librarian@chethams.org.uk

Thanks Simon for this interesting information about your late father.