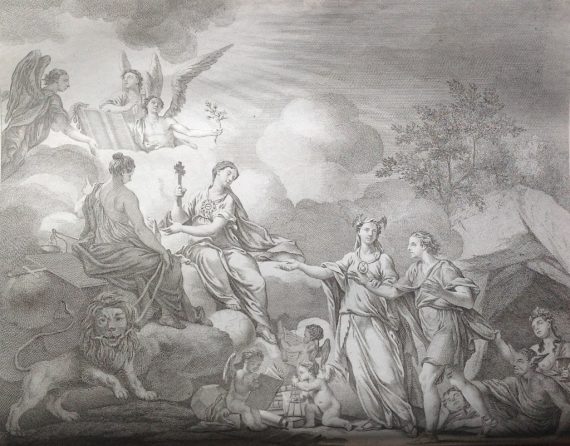 Whilst it is true that the collections at Chetham’s were built up in a very deliberate, conscious manner, with each book being selected by governors and librarians because it fulfilled Chetham’s purpose of establishing a library for the use of scholars, we don’t always know where each book came from, or why or how it was acquired.

This is illustrated by a large folio volume housed in the gallery, a part of the library not normally open to the public, which is lettered on the spine Oxford Almanacs. When a recent visitor asked what it was, we could answer, large sheet almanacs published each year by Oxford University. When asked why we had it was more difficult to explain.

The volume contains 92 almanacs that were printed annually at the Clarendon Press in Oxford. Our set began in 1716 and continues with some gaps until 1854, but the first Oxford almanac was brought out for 1674 and the series has been continuous since 1676. Each contains a calendar and information relating to the University as well as other more general information. But their interest and appeal lies in the fact that each almanac contains a large picture. They began with allegorical subjects in the seventeenth century but then continued with designs for college buildings and portraits of college founders and benefactors. Later they shifted to topographical subjects. They are both beautiful and occasionally baffling. The almanac for 1755 is described in Helen Petter’s 1974 catalogue of the series as: ‘A young man is being led by a woman with wings on her head towards two figures seated on clouds; one holds a cross an the other the reins of a lion. Above them three angels hold a book which is flooded by light from the sky. Beneath them putti play with instruments and books. The young man is restrained by two figures at the mouth of a cave; the man has ass’s ears and the woman holds a cup. Behind them is the head of a sleeping figure.’ Thankfully the official explanation accompanying the picture makes it all crystal clear: ’Science or Learning conducting Mankind from Sloth, Ignorance, and Sensuality to the knowledge of divine and Moral Truths, personified by the two women who represent the Christian Faith and Morality, and together make the whole of the Religion, signified by the open Bible.’ Yep. Much clearer. What’s our favourite? Easy, the almanac for 1752 – the opening of the Radcliffe Library. The last almanac engraved by George Verytue (1684-1756), who was engraver to the Society of Antiquaries as well as to the University. The picture is of the Library as designed by James Gibbs which opened in 1749. The official explanation describes the scene as a ‘Representation of the Solemnity at the time of opening the said library’. Too right. For any library groupie, and for us that cap really does fit, this image is hard to beat, and solemnity is our middle name…