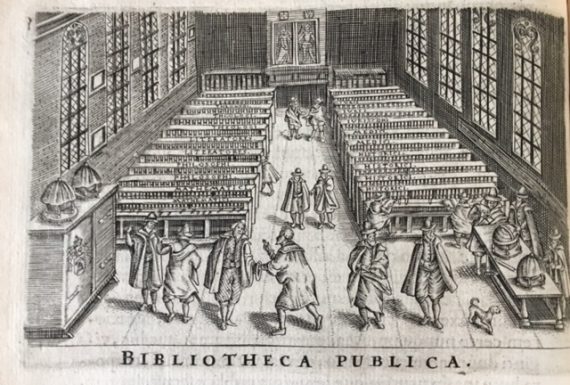 The University Library of Leiden was divided into two rows of bookcases for folios, with the smaller books arranged at the back. On the left is mathematics, philosophy, literature and theology, with history, medicine and law on the right. Each row of books had a table at which readers might stand to study a chained volume.

The image above is taken from Johannes van Meurs, Athenae Batavae (Leiden: Elzevir, 1625) and is one of the most famous depictions of the interior of a seventeenth-century library. It shows tourists as well as scholars – the rows of chained books, the portraits of Willem and Maurits of Orange, a picture of Constantinople, portraits of Erasmus and Janus Seconds, a cabinet containing manuscripts donated by the great scholar Joseph Scaliger, two men examining a globe and visitors courteously greeting and conversing with one another.

Chetham’s Library was housed in a building that was too narrow to allow a central aisle between rows of books. Instead the original bookcases were arranged against the outside wall leaving the passageways against an internal wall (the wall bookcase dates from the middle of the eighteenth century). Where as in Leiden, readers would work where the books were shelved, like Leiden the books were chained, but in Manchester, we made stools so that readers could sit rather than stand to read the books. The arrangement differed from Leiden. At Chetham’s the order was theology, history, mathematics and physics, and then literature. Where the law books were shelved is anyone’s guess. As in Leiden, readers and visitors would mingle: all useful learning, which was universal in its scope, would be housed under one ark of a roof as a statement of civic pride. Unlike Leiden we were less tolerant of dogs, although the number of cat flaps in the building indicates that cats and their ability to keep down vermin were more highly valued.