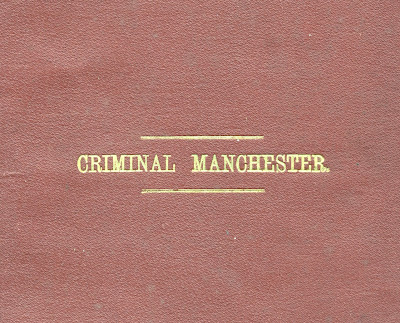 This slim volume, published in Manchester in the 1880s, comprises ten chapters reprinted from the Manchester Evening News exploring Manchester’s underworld. In each chapter, our man from the Evening News, having struck up an association with ‘one who has returned but recently from penal servitude’, explores various districts of the city under the cover of darkness.

Beginning his adventures not far from the Library gates on Long Millgate, our correspondent enters a world previously unknown to him, although judging from some of the chapter headings, things may not be much changed over a century later: ‘Deansgate: Scenes on a Saturday night’ describes the crowds ‘spending Saturday night in the most approved English fashion – that is to say, they were recklessly getting rid of all their spare cash, and receiving in return various forms of drink’.

The scene soon darkens, however, describing ‘criminality that can scarcely be touched upon’, including dog-fighting, thieving, violence, prostitution, poverty, squalor and misery, and a cast of characters with unforgettable names that nowadays, sadly, would probably be unpublishable: Ginger Liz, Cockney Jim, Dirty Alf, Big Jack and Fat Ann.