Cup of coffee anyone? 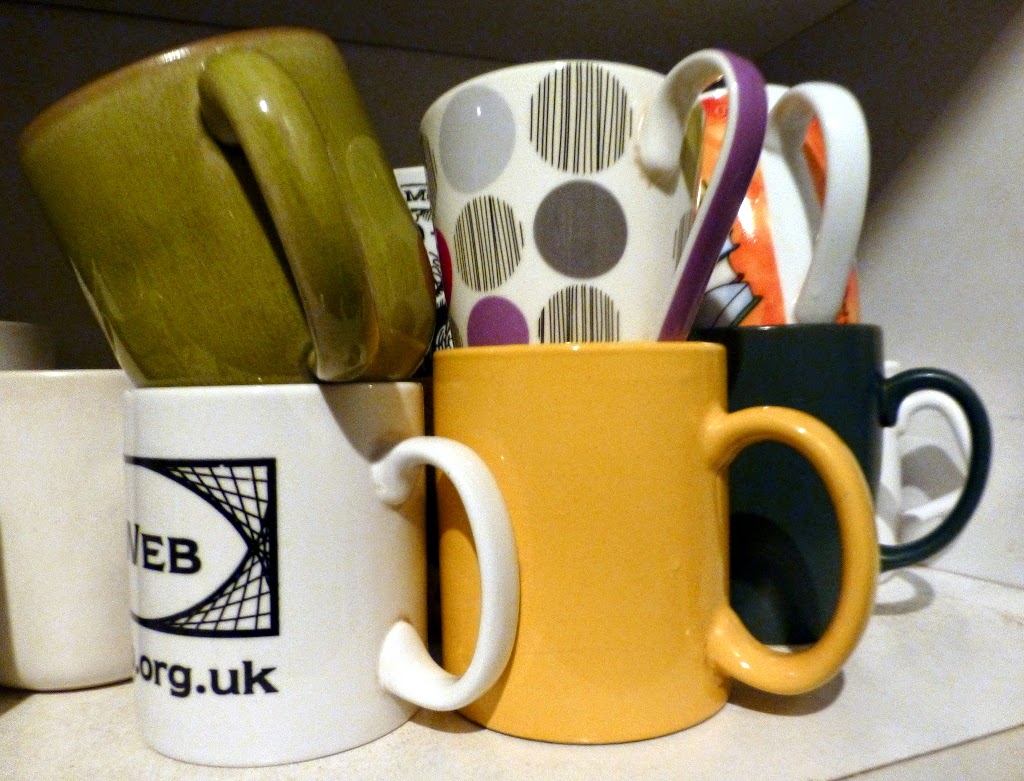 Enjoying a mid-morning break recently reminded us that the library has some interesting items relating to the history of coffee and coffee houses.

One of our earliest sources, published in 1682 and attributed to John Chamberlayne, is The natural history coffee, thee, chocolate and tobacco. In four several sections; with a tract of elder and juniper-berries, shewing how useful they may be in our coffee-houses: and also the best way of making mum, with some remarks upon that liquor. Collected from the writings of the best physicians, and modern travellers. 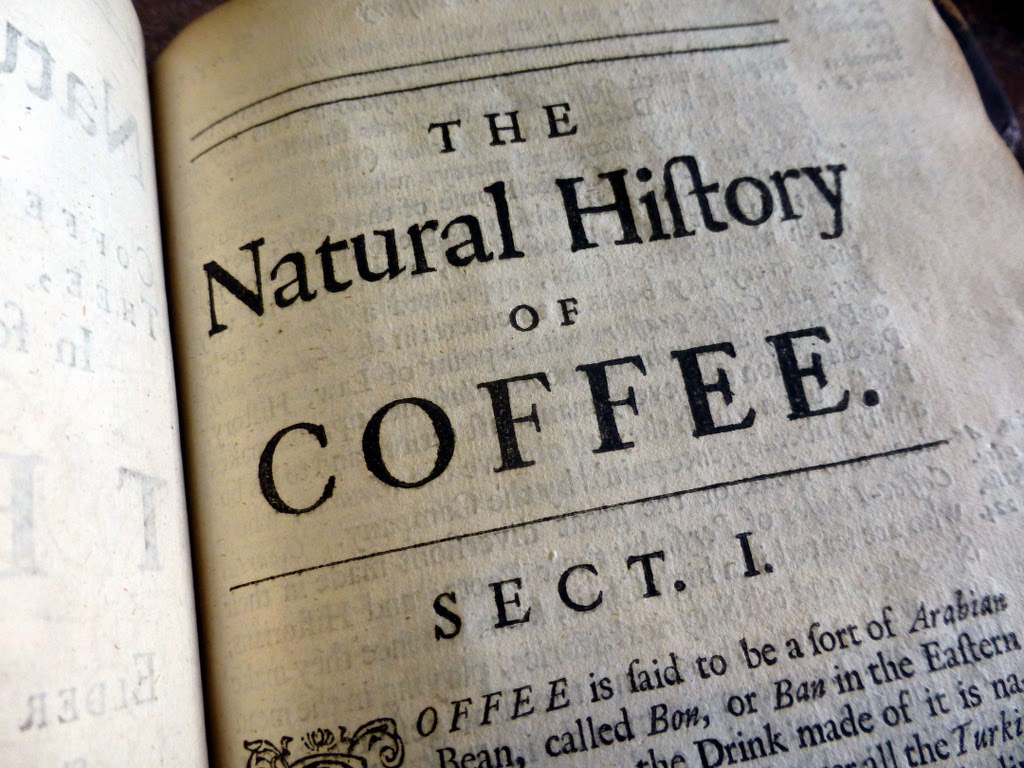 Chamberlayne starts with a brief history of coffee drinking in the East and goes on to discuss its use as a medical treatment in England by one Dr Willis:

‘In several headachs [sic] Dizziness, Lethargies and Catarrhs, where there is gross habit of the body…there coffee may be proper and successful; and in these cases he sent his patients to the Coffee-House rather than to the Apothecaries Shop’

However, he then records an unfortunate side effect of this treatment reported by the doctor:

‘which I am afraid will cow our Citizens from ever meddling with it hereafter, that it often makes men Paralytick, and does slacken their strings, as they become unfit for the sports and exercises of the Bed, and their Wives recreations…’

Despite these dire warnings, coffee houses became ever more popular in the seventeenth and early eighteenth centuries. A cup of coffee was relatively cheap and the shops became venues for social networking, reading newspapers, doing business, gossiping and, allegedly, political intrigue.

In our Halliwell-Phillipps Collection we have a copy of the ‘Proclamation for the suppression of coffee-houses’ published in 1675 by King Charles II:

‘Whereas it is most apparent that the multitude of coffee houses of late years set up and kept within this kingdom, the dominion of Wales and the town of Berwick-upon-Tweed, and the great resort of idle and disaffected persons to them, have produced very evil and dangerous effects, as well as that many tradesmen and others do therein misspend much of their time, which might and probably would otherwise be employed in and about their lawful callings and affairs, but also for that in such houses, and by occasion of the meeting of such persons therein, many false, malicious, and scandalous reports are devised and spread abroad, to the deformation of his Majesty’s government and to the disturbance of the peace and quiet of the realm, his Majesty has thought it fit and necessary that the said coffee houses be for the future put down and suppressed.’

From the same year, we have a tiny five-page pamphlet with an incredibly lengthy title, which echoes the concerns of his majesty about the costs to business of spending too much time in coffee houses: 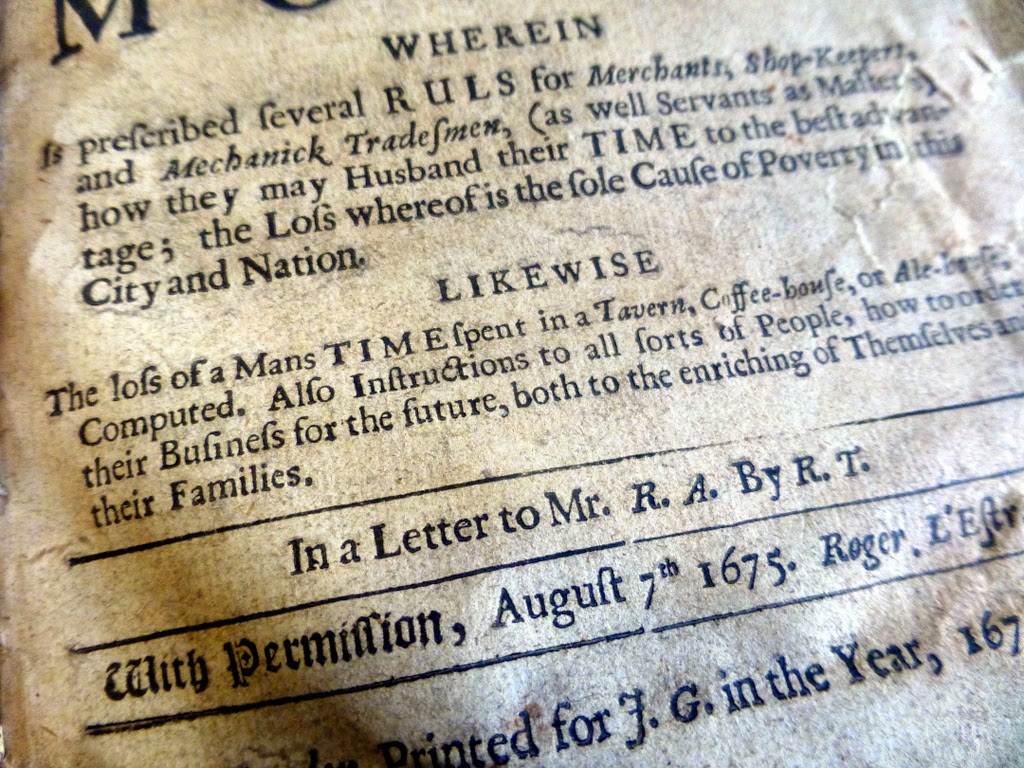 The art of good husbandry, or, The improvement of time: : being a sure way to get and keep money. Wherein is prescribed several ruls [sic] for merchants, shop-keepers, and mechanick tradesmen, (as well servants as masters) how they may husband their time to the best advantage; the loss whereof is the sole cause of poverty in this city and nation. Likewise the loss of a mans time spent in a tavern, coffee-house, or ale-house, computed. Also instructions to all sorts of people, how to order their business for the future, both to the enriching of themselves and their families / In a letter to Mr. R. A. by R. T.
The King failed in his attempt to suppress coffee houses and, by the turn of the century in London, many of them had become rowdy drinking dens and even brothels. In our engraving ‘Morning,’ from Hogarth’s 1738 series ‘Four times of the day,’ he depicts the notorious ‘Tom Kings Coffee House’. The scene is Covent Garden and, by the time Hogarth made the print, the coffee house was being run by Tom’s widow Moll, who apparently opened the doors as the taverns were closing and allowed customers to continue drinking and carousing till dawn. ‘Morning’ shows the market stallholders setting out fruit and vegetables  whilst in the coffee houses the revellers are still partying, a fight has broken out and a wig flies out of the door. 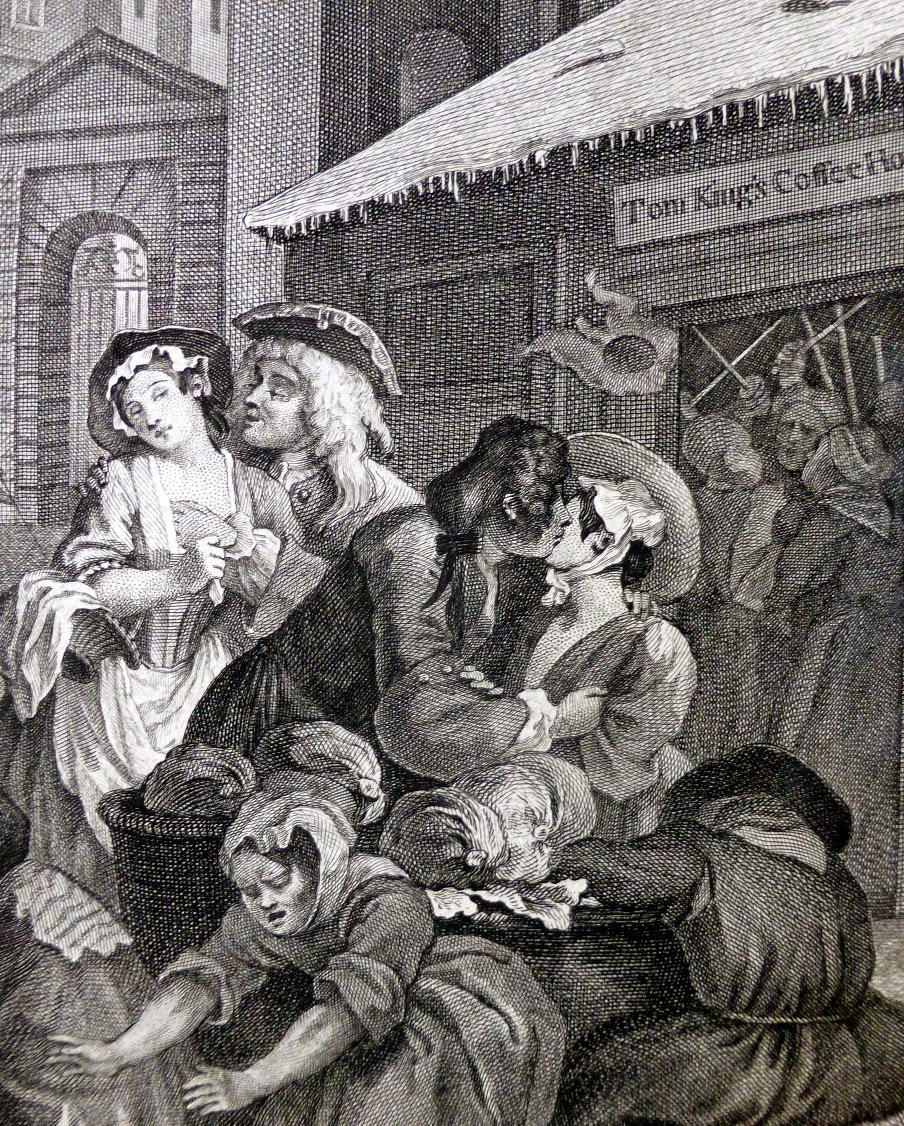 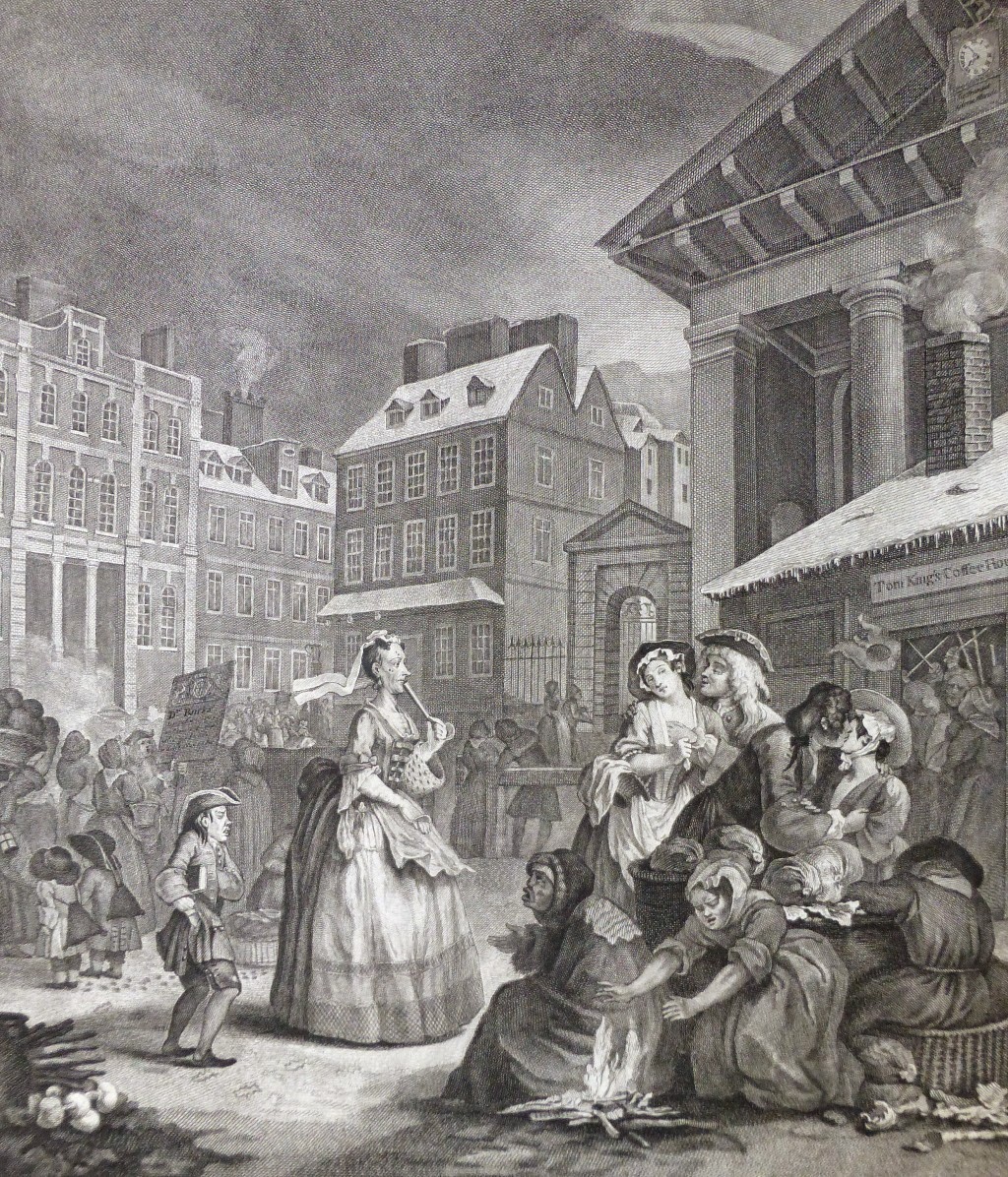 Still the idea lingered for a while longer of coffee houses as democratic establishments which encouraged civilised discussion and debate, places where anyone was welcome as long as they paid for their refreshment and observed the ‘rules’  and procedures of the particular establishment.
Perhaps too, things were different in the provinces. The library has a broadside from 1793 with the  rules of a local establishment, the ‘Manchester Coffee Room’ which make it sound more like a library than a den of iniquity!

‘Rules and orders to be observed in this room:

7th That if any person shall take any Newspaper, Book, Pamphlet,&c out of this Room, or cut out any Advertisement, Paragraph or Print, from such a Newspaper, Book or Pamphlet, he shall, on Discovery, be expelled the Room, whether he be a Subscriber or otherwise, and shall be deemed ineligible for future Admission’

8th That no subscriber, or other person, be permitted to put on, or pull off, Boots in this Room, nor come into it with Slippers on’ . 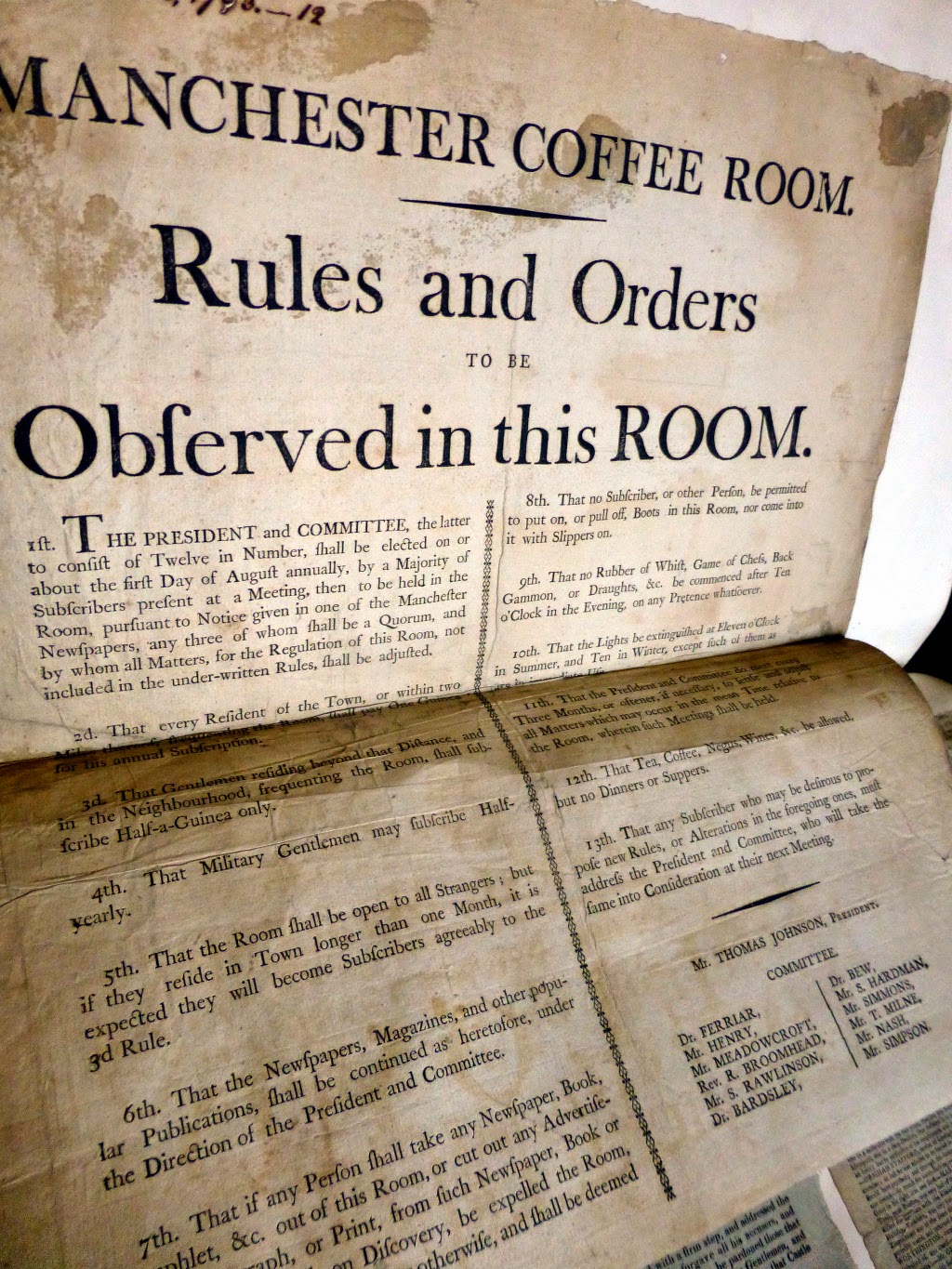