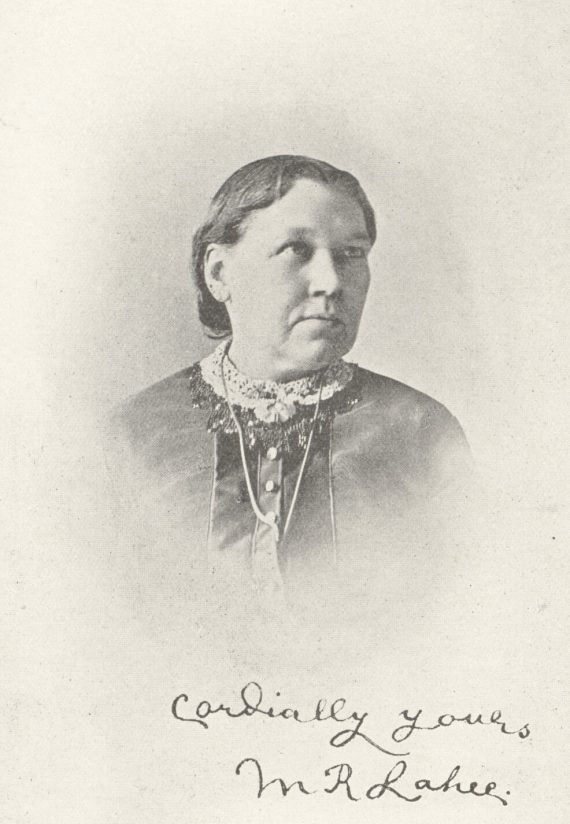 ‘I have laboured in the field of Lancashire literature for over half my life-time, and have tried to bring forth the pure gold hidden beneath the surface of the people’s nature.’
M. R. Lahee 1891

We are very excited about our recent acquisition of works from the collection of the late Dr Eddie Cass, a great student and collector of all things Lancashire. Volumes by M. R. Lahee intrigued us as we started to unpack this treasure trove and wondered who this writer was. A portrait of a surprising and fascinating woman started to emerge from the ‘biographical’ section at the beginning of the thirty-third edition of her Owd Neddy Fitton’s Visit to the Earl o’ Derby. The library’s copy of William Pollard’s recently published biography, M.R.Lahee Rochdale’s Forgotten Dialect Author (2016), also provided a wealth of information about her life, the social and political contexts in Lancashire and Ireland alongside detailed descriptions of her prolific writings.  We also learned from Pollard that she referred to Chethams in her story Owd Yem un his Foive Daughters:

Margaret Rebecca Lahee was a rare female author in the male dominated world of 19th century Lancashire dialect writing. She grew up in Ireland, where she was born in 1831, and moved to Rochdale as a young woman to learn millinery, dress and mantle making from a friend of her relatives, Miss Kavanagh. She did not take to stitching so decided to earn her living as a writer. She had landed in the right place as nineteenth century Rochdale was known for its dialect writers, and she was particularly inspired by the renowned local writer, Edwin Waugh.

Her first publication, Owd Neddy Fitton’s Visit to the Earl o’ Derby, was based on the true story of Neddy Fitton who refused to accept a steep rent rise from his landlord’s agent when his lease came up for renewal. He insisted on putting his case in person to his landlord, The Earl of Derby, who was so taken with him that he renewed the lease without raising the rent. Owd Neddy was an immediate success and went into many editions. The biographical section of this book cites Edwin Waugh’s view of it as ‘the best story in the Lancashire dialect.’ William Dinsmore also regarded her as ‘one of best writers in the Lancashire vernacular’ in an appreciation he wrote for the Manchester Literary Club in 1895, Lancashire Novelists: Miss Lahee.

This success was a remarkable achievement for an Irish woman who had no knowledge of Lancashire dialect only a few years previously and who was writing in a very male dominated field at a time when there was significant anti Irish feeling. Pollard notes that she concealed that she was a woman and that she was Irish, initially by publishing anonymously, or using her initials, MRL, then later as the gender neutral M.R. Lahee. Like other dialect writing, Lahee’s work is peopled with quaint local characters based on the people she befriended in her neighbourhood and on her rambles round the local countryside. Her stories are drawn from the routines and events of their everyday lives and are written in standard English alongside the vernacular which she adopts to portray poor and working people. Modern readers can find Lancashire dialect very difficult to read, and looking at it through a contemporary lens can lead us to dismiss it as simplistic, whimsical, and patronising. However, it was extremely popular in its time, perhaps because it held a mirror to and affirmed the way of life, language, culture and humour that readers valued. As Lahee writes in her preface to Owd Neddy Fitton’s Visit to the Earl o’ Derby:

‘I ought perhaps to offer some apology for certain homely words which may appear coarse and vulgar to the more fastidious reader, but as NEDDY was nobbut a gradely straightforrad owd chap, an’ noan used to sich loike mee-maw wark as refined Literature, I thought it but justice to him to transcribe this tale in his own plain language, and I am of the opinion that the honest John Bull manner of the old Lancashire farmer will be admired throughout the work.’

A perceptible difference between Lahee and her male contemporaries is that she presented the female perspective in relationships between women and men in her humorous stories. Her stories also brought out some of the particular difficulties women faced because of inequalities in their social, legal and financial circumstances. In Traits and Sketches of Quaint Lancashire Folk, published in 1887, she touches on women’s rights. Old Bob has just left the workhouse after leaving prison where he was sent for playing his pipe. He moans: The library has copies of Lahee’s first novel Acquitted though Guilty (1883) and Sybil West written in 1893. Acquitted though Guilty is a rather sentimental and predictable story, but it does also address serious themes such as the financial vulnerability of widows, rural poverty, greedy landlords and unscrupulous agents. Sybil West (1892) tackles the working conditions of women mill workers, especially the pressures placed on women and their vulnerability to sexual assault. M. R. Lahee’s personal life was unconventional and she was not universally accepted by Rochdale’s establishment. She lived in a close relationship with Susannah Rothwell Wild for over thirty years until her death in 1895. She requested they should share a grave and the inscription on the tombstone should read, ‘They were lovely and pleasant in their lives, and in death they were undivided.’ The local establishment, possibly instigated by Archdeacon Wilson, refused to meet her wish to be buried in Healy churchyard although it is not known whether this was because she was a woman, not from Rochdale or her sexuality. Wild died a year later and although she was buried in the same grave, it was never marked with the inscription she had wanted.

After Lahee’s death a public meeting in Rochdale Town Hall decided that a memorial to Rochdale dialect writers should be erected. Archdeacon Wilson opposed Lahee’s inclusion on the monument but Wild, who was devasted by Lahee’s death, successfully campaigned to make sure that she was one of the writers celebrated. Edward Sykes, a local architect, was commissioned to design the monument which was completed in 1900 and features portraits in bronze by John Cassidy of Margaret Rebecca Lahee, Oliver Ormerod, John Trafford Clegg and Edwin Waugh. We can still see the tribute to this remarkable woman on the memorial in Broadfield Park, Rochdale.