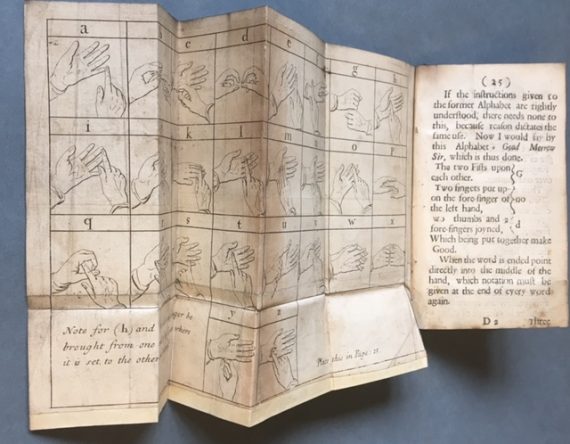 or the most compendious, copious, facile and secret way of silent converse ever yet discovered

Published in London in 1698, Digiti-Lingua is a milestone in the history of sign language. It provided the earliest form of the modern two handed alphabet, and the first depiction of the consonant handshapes now used extensively in Sign Language.

The anonymous author of this slim 30-page pamphlet claimed to have used no other language, ‘having been obliged (thro’ an unfortunate impediment) to these, or some such like methods of Converse, for now near ten years last past’. The book also claimed to show ‘how any two persons may be capable, in half an hours time, to discourse together by they fingers, only, and as well in the dark and the light.’ No explicit reference is made to deaf people and it is not actually clear if the author himself was deaf. He suggested that his book might be used when silence and secrecy were required or purely for entertainment. The author critiqued a number of other studies including the ‘pretty piece of Ingenuity, intituled Sermo Mirabilis’ as slower and less easy to follow, saying ‘All that can be done by the directions given in Sermo Mirabilis, may be more quick, free, and easily done, by the Alphabets here delivered, and much more’. A folding plate gave clear pictures of how to sign.