Dr. Ferriar or: How I Learned to Stop Worrying and See Ghosts 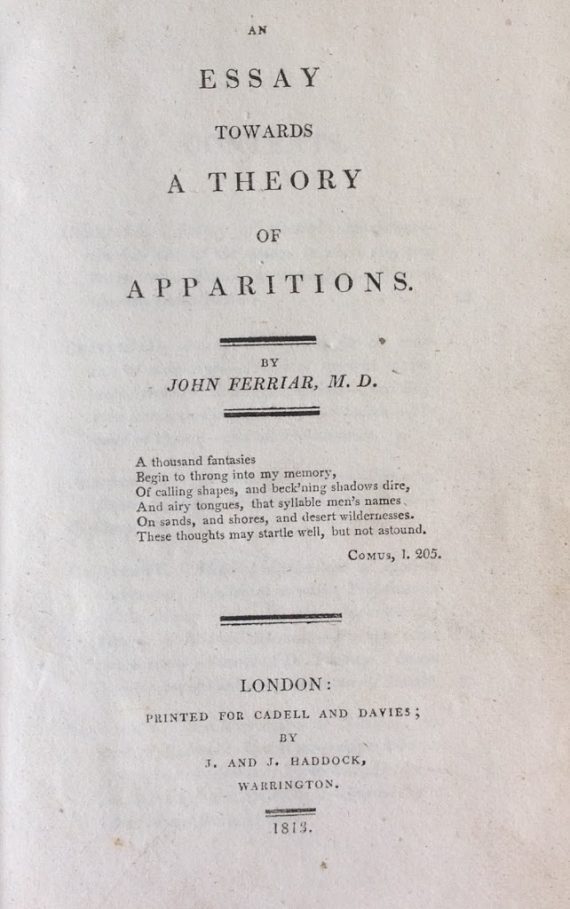 We are very pleased to announce a new acquisition, John Ferriar’s An essay towards a theory of apparitions (1813), purchased from one of our favourite bookshops, Ken Spelman of York. Ferriar (1761-1815), was a Scottish physician and a poet, but particularly noted in Manchester for his leadership of the Infirmary, and for his studies of the causes of diseases such as typhoid. In the theory of apparitions Ferriar set forward an argument that spectral illusions were to be traced to disorders and diseases of the human bodily apparatus. Ferriar considered it a fact that ‘the forms of dead, or absent persons have been seen, and their voices have been heard, by witnesses whose testimony is entitled to belief’. How then to explain these occurrences among people classed as ‘normal’ and ‘sane’? For Ferriar apparitions could be explained by what he termed a ‘renewal of external impressions’ through which a visual memory could be reanimated via the visual sense; a sort of ‘waking dreams composed of the shreds and patches of past sensations’. The theory of apparitions was Ferriar’s last published work. It was preceded by his Medical Histories and Reflections, a series of medical papers 3 vols (1792-98) the poem Bibliomania, an Epistle to Richard Heber, Esq. (1809), and his best-known book, Illustrations of Sterne, with other Essays and Verses (1798; 2nd edn, 2 vols., with additions, 1812), in which he traced Sterne’s indebtedness to older French novelists. Ferriar’s books at the Library are especially interesting for their provenance. Our copy of vol. 1 of his Medical Histories and Reflections was owned at one time by Edward Jenner, the pioneer of the smallpox vaccination. A copy of Béroalde de Verville’s Le Moyen de Parvenir (1757) came into Ferriar’s possession from Richard Heber. But before Heber the book was owned by Laurence Sterne and contains his inscription on the flyleaf of vol. 1.