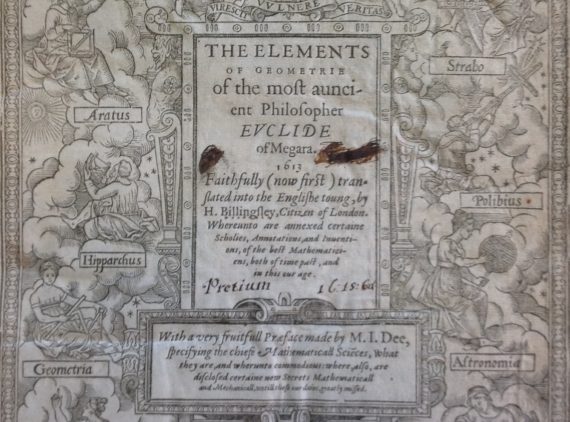 The first English translation of Euclid was brought out by the printer John Daye in London in 1570. The translation was made by Henry Billingsley, (d.1606), a rich merchant who served as Lord Mayor of London. He was also a mathematics graduate of Cambridge University and well versed in Greek. Billingsley translated the thirteen books of Euclid from the Greek edition of Theon of Alexandria (ca. 390), added additional works attributed to Euclid, and included an extensive commentary. The resulting book was over a thousand pages long, and included a preface by John Dee, mathematician, astronomer, astrologer, occultist, navigator, imperialist, consultant to Queen Elizabeth, who would later end up in the buildings now occupied by the Library as Warden of the College of Manchester. Dee’s Mathematical Preface surveyed all the branches of pure and applied mathematics of the time and is an extraordinary account of the philosophy of mathematics. For Dee, numbers were the basis of all things and the key to knowledge.

The title of the book The elements of geometrie of the most auncient philosopher Euclide of Megara, confused Euclid of Alexandria with the Greek Socratic philosopher, Euclid of Megara; the two were frequently confused during the Renaissance. Getting the author mixed up is odd but the most striking feature of Billingsley’s English translation of Euclid are a set of pop-ups – pasted flaps of paper that can be folded up to produce three dimensional models of the propositions in Book XI. These geometrical solids, make this one of the oldest “pop-up” books in English.