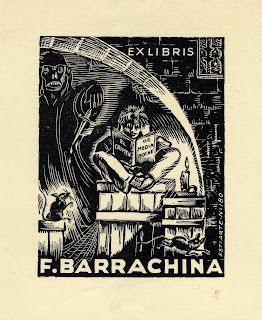 Bookplate collecting is a serious business. There is a plethora of collections and collectors lurking in private and in the public domain and, it seems, an entire world devoted to the discussion and documentation of this pursuit through societies and international journals. Chetham’s Library currently houses a collection of over 20,000 bookplates. The Heraldry Society’s W. W. Porteous Collection and Marshall Pierson Bookplate Collection show us excellent specimens ranging from armorial and heraldic to naval and military examples. However, the collections also branch out into the more weird and wonderful, containing unusual pictorial bookplates from around the world. 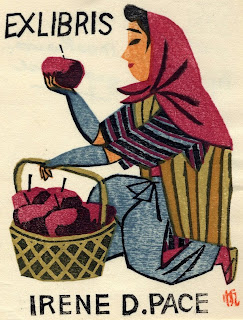 A notable and delightful part of this quaint collection comprises bookplates made for two avid collectors, Mrs. Irene D. Andrews Pace and Mary Alice Ercolini during the mid 20th Century. Pace travelled widely around the world due to her husband’s military career and during this time she collected and commissioned bookplates from artists and engravers at the places they visited, building up a personal library of over 150,000 items. A large proportion of this collection is held at Yale University, but a selection also resides permanently at Chetham’s Library. The Chetham’s collection shows examples of fine printing and engraving which illustrate the life of a well-travelled collector.

Less is known about American enthusiast Mary Alice Ercolini, but it seems that she too was an avid collector of books and bookplates. She was also a well known member of the American Society of Bookplate Collectors and Designers and an author of their yearbook. Her pastime as represented in the Library’s bookplate collection is similarly charming; her plates depicting cats, of which she seems to have been particularly enamoured, are especially so.

Although the plates made and collected by Pace and by Ercolini form only a small (if notable) part of the collection, they are good examples of the variety to be found and of the popularity of bookplate collecting we can see among bibliophiles when we examine this collection. There are many more curious snippets to be found, including volumes that sample library and university plates, and a wide mix of religious, mythological and in some cases phantasmagorical examples according to the collectors’ different predilections.