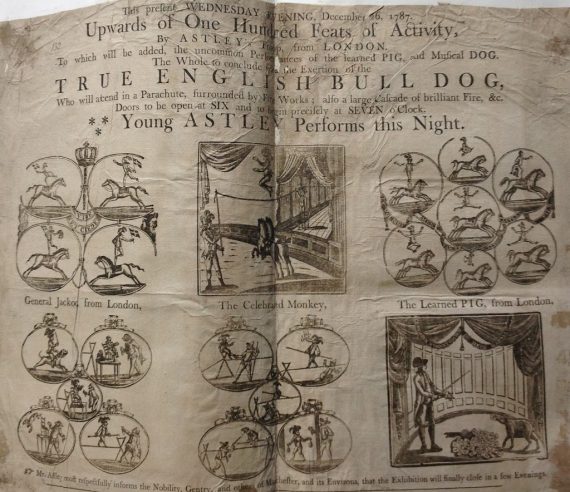 One of our wonderful Manchester scrapbooks is always referred to as ‘Cambrics’ – a rather curious name which simply describes the original fabric which covered the scrapbook. Within the book is a rich assortment of what the donor refers to as ‘handbills’ which cover topics as diverse as theatrical performances, a set of rules for the Coffee House, notices and reports of political and trade meetings, and a small collection of very early bills advertising local circus performances. The term circus comes from the Latin for circle and was first used by the Romans to describe the entertainments staged in their amphitheatres. Our modern usage dates from the eighteenth century, when the showmen Philip Astley and Charles Dibdin developed equestrian entertainments which were performed in circular spaces with the audience seated around the sides (Dibdin was actually the first to use the word ‘circus’ in his advertising). Animals were popular but demonstrations of equestrian skills or ‘trick riding’  were always at the centre of these shows.

Three of our circus bills advertise the performances of Philip Astley’s ‘troop’. The earliest is dated 5 March 1773 and announces: ‘Horsemanship. Mr Astley and pupils will exhibit their various feats, in a manner quite new and surprising, in a field opposite to Strangeways gardens, this afternoon, being Friday, exactly at three o’clock’. The images of the horses and riders have great charm, although the animals do tend to resemble rocking horses. One of the riders has a banner flying above his head which says ‘I’m only five years old’. By December of 1787, Astley is describing his show as being ‘By his majesty’s royal letters patent. At the riding house in Tib-street…a grand display of various exercises, by Astley’s company of dancers, tumblers, vaulters, and musical performers, on several horses.’ The individual acts are all listed and include ‘a minuet by two horses’ the ‘Metamorphose of the Sack by Mr Lansdale’ and ‘several feats on horseback by a young lady, Miss Vangibles. Performances are peculiar to herself – first appearance in Manchester…’

Philip Astley (1742-1814) is usually credited with the invention of the first circus. He had joined the dragoons at the age of 17 and became famous for his prowess at riding and breaking in horses. In 1768 after leaving the army he set up his own riding school and he and his wife began performing various tricks  and equestrian feats, for which they charged spectators 6d or a shilling to watch. The business flourished and Astley toured his performers to fairs, markets, race meetings and pleasure gardens all over the country.

Horses moving around a circular space are much easier for equestrian performers, as centrifugal force helps them to balance. Over the years Astley developed covered rings and tiered seating and constructed temporary rings for use when travelling.

Other circus shows in Manchester were from Mr Jones in 1784, whose show was to be staged ‘at the riding school near the Infirmary’ and two bills for the New Circus in 1793. One features Mr Parker ‘on his young charger’ demonstrating for one night only the ‘various evolutions of the Broadsword’. The dramatic image depicts Mr Parker, dressed as a hussar, brandishing his sword on his rearing steed. The other New Circus poster shows Mr Smith who ‘leaps thro a balloon and lights on the saddle’ although he looks strangely immobile and appears to be weighed down by the huge feathers crowning his hat. The poster for the Olympic Circus at the Minor Theatre is a later date, 1817, and offers the spectacle of ‘a Country Dance by Six Horses’ and also ‘Miss Bannister the intrepid female Equestrian’ who, in an encouraging example of female emancipation, is demonstrating the Six Divisions of the Broad Sword Exercise. Circuses remained hugely popular over the next hundred years and Brenda Assail, in her book The Circus and Victorian Society, records that Lancashire had more circus performances in the nineteenth century than any other county and that in Manchester between 1847 and 1848 alone, the public enjoyed 120 performances.

We’ve recently had some very good news relating to Cambrics and our circus posters, as the library has received a grant from the Arts Council’s Designation Development Fund which will enable us to digitise our collection of single sheet material (broadsides, ballads and ephemera).