From Flanders Fields to Worsley Hall 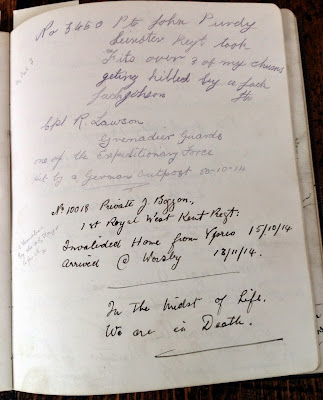 One hundred years ago many of the great houses of Great Britain were converted into temporary hospitals to treat wounded servicemen home from the fighting on the Western Front. Worsley Hall in Greater Manchester was one of these. In 1914 Lord Ellesmere loaned his property to the British Red Cross which opened up a hospital unit of around one hundred beds to treat wounded and sick soldiers. The staff, many of whom were distinguished in their field, were drawn from local hospitals. One of these was Ernest Bosdin Leech. During the last months of 1914 and the early months of 1915 he treated a number of patients at Worsley Hall. Not only did he keep a diary of this time, part of the extensive Leech Family Diaries, he also kept a notebook in which his patients wrote their names, regiments, and in some cases their home address in their own handwriting. They often noted the battles they had fought in, the reason they were in hospital, and in some cases a more detailed description of their experiences, or some verses of poetry. In a few cases they made a drawing. There is something uniquely powerful in reading these accounts of the war in the handwriting of men so recently returned from the front.

The patients of 1914 were largely from Britain’s professional army which bore the brunt of the fighting alongside the French and Belgium armies. Many of them were involved the the bloody fighting around Mons and the weeks of rear-guard action that followed. Herbert Rhodes of the 60th Battery Royal Field Artillery left England on 8 August and fought throughout the ‘retirement’ from Mons. ‘I was on my horse’s back for a week and when I did get off my horse I could not stand and was very sore’. He had little time to recover. The German Army was defeated at the Battle of the Marne and withdrew to the high ground. This marked the end of the mobile war and the beginning of trench warfare. The first battle of this new type of warfare was the Battle of Aisne. Herbert Rhodes was there: ‘I then went to the Battle of Aisne where we were in action for a month and two days and blew the Germans out of the caves where the French were defeated in 1870’. He went on to Ypres where he was wounded in the leg.

Not all the patients had suffered physical injuries. Even at this early stage of the war the psychological strain was manifest. Private John Purdy of the Leinster Regiment wrote, in a shaky hand, that he ‘took fits over three of his chums getting killed by a Jack Johnson’ (a type of shell). A contemporary newspaper report of the hospital remarks that although the soldiers make light of their experiences by day, at night the depth of their trauma emerged. ‘Though their waking hours are very light, at night time many of the men suffer terrible nightmares. They imagine themselves back again in the trenches fighting phantom hosts and frequently the nursing staff have much difficulty in calming the poor fellows.’ 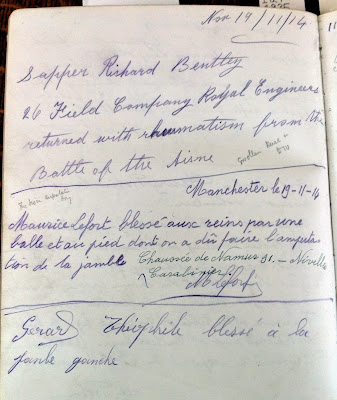 A surprising number of patients were admitted not as a result of enemy action, but because of that other fight against the elements. Living outside through the cold and wet of a northern European autumn and winter, in a constant state of anxiety and physical exhaustion, took its toll. One such victim was Private W. Hilton of the Sutherland Highlanders: ‘Went to the front on August 12. Was at the Battles of La Cateaux, Aisne and Messines. Sent home with ague, rheumatism and nervousness through sleeping out in the wet’. As the war dragged on through the first winter an increasing number of men were admitted with frostbitten feet. Other soldiers were admitted because of the inadequacy of their equipment. Private Irving of the Duke of Wellington’s West Riding Regiment was invalided home on 2 January 1915 with a septic ankle caused through ‘marching with bad boots’. How many fighting men were lost to the British Army through lack of warm socks and properly fitting waterproof footwear?

Most of the patients wrote entries that were positive or neutral in tone. Some were humorous. Bertie Caldwell of the 21 Sherwood Foresters, who had received six bullet wounds at the battle of Aisne on 20 September, obviously wanted to make the nurses smile with a cheeky ditty:
‘The Sultan got sick of his harem
And invented a scheme for to scarem
So he caught him a mouse
Which he loosed in the house
The confusion is caused harem scarem’.

However sometimes their despair comes through as in this entry from Private H. Mace of the 1st Glosters Regiment: ‘Wounded in the Battle of Aisne September 22nd, left leg amputated. Sent back to Worsley Hall as nobody else wanted me.’

A number of patients at the hospital were from the Belgian army. These men had fought in a desperate delaying action from the first days of the war. They succeeded in preventing the German army from gaining control of the channel ports, a critical strategic defeat for the German High Command. Many of these men were conscripts rather than professional soldiers. Pierre Walbroeck and Henry Robins both of the 7th Regiment of Infantry, were cousins wounded at the Battle of Yser in October 1914. Henry, who had been a student at Ghent University, was wounded by rifle bullets in both legs and received a fractured tibia, an injury which in itself often proved fatal due to the difficulty of moving wounded men in battlefield conditions. One of their comrades Guillis Georges Fergeus of the 2nd Regiment of Sisjue had been wounded on 22 October and drew this accomplished but rather prematurely optimistic picture of a terrified Kaiser Wilhelm fleeing the fighting. 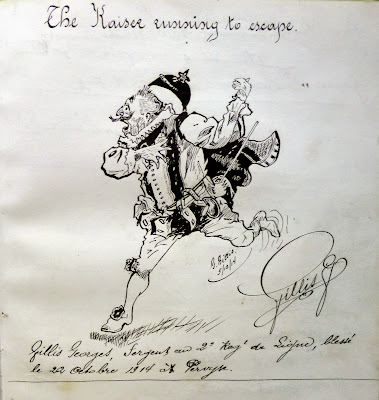 The contradictory attitude to the war held by these men is evident in verses written by two men. One a call to arms, the other a plea to just end it and go home.
John Beckett of the Worcestershire Regiment wrote:
‘Why do they call sonny, why do they call
For men who are brave and strong
It is naught to you if your country falls
And right is smashed by wrong
Is it football and the picture show?
The pub and the betting odds
When your brother stands to the tyrant’s blow
And Britain’s call is God’s.’

Sergeant Green of the XII Royal Lancers, who was wounded at the Battle of The Marne on 2 November drew a picture that could be seen as reflecting this martial spirit and the need to fight to the end. 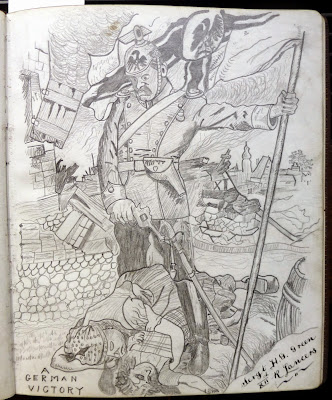 One wonders how many of these men had to go back and how many lived to witness the peace of 1919?

Many thanks to our volunteer Paul Carpenter for taking the time to write and research this blogpost.