We begin the week with an ending, a final posting from Courtney Stickland. Courtney, whose previous posts A Fresh Look at Belle Vue and the Guidebooks of Belle Vue you may remember, is working with the Belle Vue material as part of her soon to be completed MA in History from the University of Manchester. We shall miss her, and wish her luck as she starts on her PhD in the Autumn.

This week I got to delve into yet another new collection in the Chetham’s holdings: a massive box containing materials belonging to Gerald Iles, Belle Vue’s former head zookeeper. 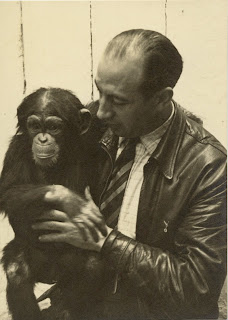 Iles’ uncle John formed Belle Vue Manchester Limited in 1925 to purchase the park from the Jennisons, who had run the Belle Vue since its establishment in the 1840s. Continuing Belle Vue’s tradition as a family affair, Gerald’s father was appointed as general manager of the park and Gerald later became zoo director in 1933 at the young age of 21. A lover of animals since childhood, Iles studied Zoology at the University of Manchester and undertook a number of trips to European zoos, gaining inspiration for how to make Belle Vue a top-notch, modern zoo. Iles infused the zoological gardens with a renewed vigour throughout the 1930 and 1940s, utilising the media and celebrities to raise publicity and the profile of the zoo. While many of Belle Vue’s beloved animals died during the Second World War, in the post-war period Iles set out to revitalise the zoo with new, exotic animals to entertain and educate visitors. Iles served as zoo director of Belle Vue until 1957 when he moved to Montreal, Canada.

The materials come to Chetham’s Library by way of Gorton Monastery where we held our Belle Vue Roadshow open house 8-9 March 2015. The collection offers some familiar items, including copies of Belle Vue’s guidebooks and circus programmes from 1930s-1950s, which you can find on the Virtual Belle Vue website, as well as a plethora of new material.

As I usually find when digging into archival collections, the finding guide only scratches the surface of exactly what is inside. Within the covers of 3 huge (and very heavy) scrapbooks I found a ton of black and white animal photos of Belle Vue’s menagerie, as well as animals from zoological collections around Europe. Leafing through the various photographic studies of lions, tigers, and bears (literally!), one really gets a sense of Iles’ passion for animals, big and small.

Scattered throughout the box are loose photographs from Belle Vue’s Silver Jubilee Circus (1953/4), starring Iles himself in the ring — not as ringmaster, but as keen zookeeper, entertainer and educator. With a wide small he presents small crocodiles, pythons and lion cubs to the rapt audience, flanked by his zoo keeping team in their caps and smart uniforms, and the circus’ camel riders in their ‘eastern’ garb.

These images truly illustrate the fusion of entertainments in Belle Vue Gardens, as well as Iles’ influence on the park. Zoological education is combined with the spectacle of the circus within the ring, delighting park audiences with exotic animals on display as specimens and entertainers.

Iles’ interest wasn’t limited to his tenure in the park, and the collection includes a number of items from Victorian and Edwardian Belle Vue. A 1911 letter from Superintendent A.B. Baker at the Smithsonian National Zoological Park to George Jennison describes recently acquired East African Lions and fond memories of Belle Vue from a trip in 1909. A letter from 20 St. Swithin’s Lane, London (dated 21 September 1894) reads:

Dear Sir,
I have been away in Norway or would have written before. I enclose photos of the monkeys, which I am sorry to say are bad.
The only plan to take such (?) and different subjects is to take them out of doors in summer. If you think it worth while I will see if these plans can be informed in any way, but I think the better plan would be to try again under more favourable conditions.

Attached to the letter with postage stamps are a faded portrait of a chimpanzee with a pipe and a baby orang-utan. The signature is difficult to discern but appears to read ‘Fraser Sandeman’. Sandeman was an English fly-fishing enthusiast who published two books on the subject: By Hook and by Crook (1892) and Angling Travels in Norway (1896), the latter possibly corresponding to the letter’s opening lines. You can read more about Sandeman here

If you have read my previous posts you’ll understand that I was particularly delighted to find a number of photographs of the park grounds and interiors at the turn of the century, complementing Chetham’s existing holdings of photographs and postcards.

The Iles Collection will not be digitised for Virtual Belle Vue at this time, but images from the other collections are still being added.