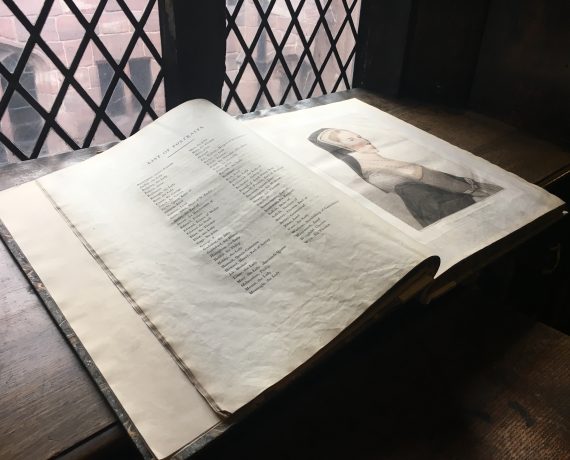 This week on BBC Four Andrew Graham Dixon presents the first of a new series ‘Art, Passion and Power: the Story of the Royal Collection’, featuring the portrait drawings and paintings of Hans Holbein.

As it happens, our ‘go to’ source for images of Tudors and Stuarts is the very large and rather lovely volume of prints taken from the Holbein drawings in the Royal Collection. Published in 1792 by John Chamberlaine, with wonderful engravings by the celebrated Italian artist Bartolozzi, the volume includes images of courtiers, nobility and members of the royal family – and there is a fascinating story behind its publication.

The painter Hans Holbein arrived in England in 1526, and by 1536 had been appointed to the prestigious post of King’s Painter to Henry VIII. Holbein painted many portraits of the royal family and members of the court, usually making chalk drawings of his sitters from life and then working these up into finished oil paintings.

The original drawings were kept in a ‘great book’ owned by Edward VI but over the next century or two, they moved in and out of the royal household and disappeared in various properties, finally being ‘re-discovered’ in 1727 in a bureau in Kensington Palace by Caroline of Ansbach, the wife of George II. She had them framed and hung them at her favourite residence, Richmond Lodge, however by the 1740s they had been returned to Kensington and under George III they were unframed and remounted in two bound volumes. During the reign of George III there were various attempts to publish the Holbein drawings and offer them for sale. Indeed, Richard Dalton, George III’s first librarian, personally engraved copies of thirty-five of them, but the quality was extremely poor (as were the sales figures).

In 1763 Dalton was in Rome buying drawings for the Royal Collections, where he met the celebrated engraver Bartolozzi, and commissioned him to make engravings of some Guercino sketches he had purchased. Dalton was so impressed with Bartolozzi’s work that he invited the engraver to London to work for the King. The Library is fortunate to have a volume of these absolutely beautiful engravings, published in 1764: Eighty-Two Prints, Engraved by Bartolozzi, &c from the original Drawings by Guercino, in the Collection of his Majesty. When he received Dalton’s invitation, Bartolozzi promptly left his wife and son in Italy and was soon appointed engraver to the King (signing most of his Holbein plates as ‘Historical Engraver to his Majesty’) and set up a studio in London with his old friend Giovanni Battista Cipriani. Over the next 35 years they produced hundreds of commercially successful prints, including work for Joshua Reynolds and Angelica Kaufman. The studio was large, busy and successful and employed many pupils, although unfortunately this often resulted in work of a very variable quality.

In 1768, George III established the prestigious Royal Academy of the Arts and, despite the fact that engravers were initially excluded from membership (they were considered craftsmen rather than artists), an exception was made for Bartolozzi (just possibly due to the fact that he was employed by the King).

In 1791, Dalton died and John Chamberlaine was appointed Keeper of Drawings and Medals to the King. Finally, eighty-four plates of Holbein drawings, engraved by Bartolozzi, were published in parts between March 1792 and February 1800. It is these prints, bound into a single volume, which we have in the Library. The full title is Imitations of original drawings by Hans Holbein, in the collection of His Majesty, for the portraits of illustrious persons of the court of Henry VIII. With biographical tracts [by E.Lodge] Published by John Chamberlaine… The accompanying text, by Edmund Lodge, is decidedly eccentric. For example, on the print of Anne Boleyn he comments that ‘the portrait before us will not tend to confirm the common report of this lady’s personal charms. Sanders and other Roman Catholic writers have told us that she was ugly and ill shaped and, in particular, that she had a tumour under her chin: perhaps these were not merely splenetic calumnies’. The appearance of the Holbein drawings was an important landmark in making public the contents of the Royal Collection and the advertisement for Chamberlaine’s publication stressed its importance for connoisseurs and artists – many of whom ‘have never heard that such a collection is extant, and very few indeed have ever seen the originals’.

Bartolozzi’s engravings display his distinctive signature style known as ‘stippling’. The technique, which became very fashionable in the mid-eighteenth century, is a mixture of engraving and etching, which uses dots and short flicks to give tones and shading. Bartolozzi also took it upon himself to ‘complete’ many of Holbein’s drawings, as well as ‘enhance’ the colouring. Sadly, Bartolozzi’s story does not have a happy ending. In 1801 he was invited to Portugal to reform the royal printing press and, although in 1807 he was made a Knight of the Order of Christ, his business ventures were badly affected by a French invasion in the same year. By the time of his death in 1815, all his goods had to be sold to settle his debts and he was buried in a paupers grave in Lisbon.

We have one or two other examples of Bartolozzi’s work in books within the Library collections but the most curious piece is a single print by William Hogarth, commissioned by his wife and published by her in 1782, after his death, towards provision of an income for her. It is rather poignant to read the contemporary criticism of this image, originally created by Hogarth, the English artist famed for his extraordinary skill as an engraver and here engraved by Bartolozzi, the most celebrated Italian engraver of the period:

‘The Shrimp Girl, a head, from an original sketch in oil, in the possession of Mrs Hogarth. This plate, which is executed in the dotted manner much at present in fashion, should have been etched or engraved like those excellent performances by Bartolozzi after the drawings of Guercino. Spirit, rather than delicacy, is the characteristic of our artist’s Shrimp Girl.’

(From John Nichols, an early biographer of Hogarth, in his Biographical anecdotes of Mr Hogarth, and a catalogue of his works, with occasional remarks, 1781.)