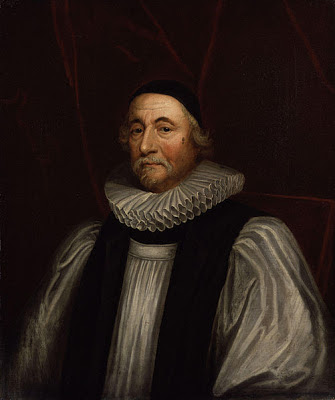 The Library holds a large number of works by the prolific scholar and Archbishop James Ussher, whose 432nd birthday it would have been today.

Ussher is perhaps most famous for his chronology purporting to establish the time and date of the Creation, which he established as taking place on the evening preceding Sunday, 23rd October, 4004BC. This would make the earth 6017 years old, a bold claim that is yet, we feel, to be satisfactorily disproved by today’s heathenish scientists.

Archbishop Ussher seems to have been a particular favourite of Humphrey Chetham, whose vellum-bound personal copy of his Discourse of the religion anciently professed by the Irish and British, 1631, turned up ten years ago at a London bookseller and was bought and returned to its proper home here at the Library.