Here’s to you, Mrs Robinson 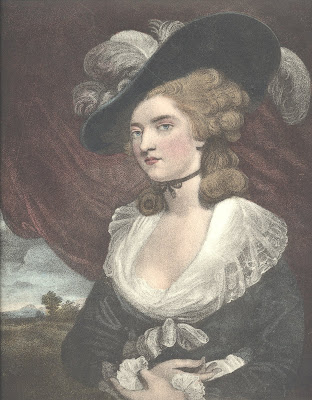 When Joshua Reynolds painted his portrait of Mary Robinson as ‘Perdita’ from The Winter’s Tale in 1782, her affair with the Prince Regent had been over for a year, and she was still trying to wrest from him the £20,000 he had promised to settle on her. Although her fame in the role of Perdita was such that she became known as ‘Perdita Robinson’, her affair with Prinny put an end to her acting career. Subsequent affairs with several distinguished gentlemen including Charles James Fox and Banastre Tarleton gained her an unfortunate reputation.

In later years Mary became an invalid and gained a new fame for her writing, including four collections of poetry, seven novels, a play, two political tracts, a translation, and countless individual poems. She was admired by Coleridge, whose Kubla Khan is said to have been inspired by a poem Robinson dictated to her daughter when she woke from a Laudanum-inspired dream. Her best known work, Sappho and Phaon, is loosely based on the Heroides and gained her a new soubriquet as the ‘English Sappho’.

Her many portraits by Reynolds, Gainsborough, Hoppner, and Romney provide her with an afterlife that her poetry failed to win, although Paula Byrne’s 2005 biography Perdita: The Life of Mary Robinson has helped to redress the balance between brains and beauty. This coloured stipple engraving from the Library’s collections of prints was made by William Dickinson from a painting by Sir Joshua Reynolds and was published in 1785.

Bring, bring to deck my brow, ye Sylvan girls,
A roseate wreath; nor for my waving hair
The costly band of studded gems prepare,
Of sparkling crysolite or orient pearls:
Love, o’er my head his canopy unfurls,
His purple pinions fan the whisp’ring air;
Mocking the golden sandal, rich and rare,
Beneath my feet the fragrant woodbine curls.
Bring the thin robe, to fold about my breast,
White as the downy swan; while round my waist
Let leaves of glossy myrtle bind the vest,
Not idly gay, but elegantly chaste!
Love scorns the nymph in wanton trappings drest;

From Sappho and Phaon