How are things in London, Old Man?

Can you be an old man the moment you’re born? You can if you’re this week’s blog-hero, John Senex (1678-1740), whose name is Latin for ‘old man’.
Ludlow-born Senex was drawn to London for his apprenticeship to the bookseller Robert Clavell, and had set up on his own account by 1702. He was to become one of the most prominent scientific engravers, map-makers and booksellers of his age, produced a famous and influential series of globes celestial and terrain, and died a Fellow of the Royal Society.
Cataloguing at Chetham’s in recent years reveals what must be true in so many libraries with significant map or scientific collections: Sensex’s imprint, work and often minute engraved signature crops up in many places.  The Library is modestly famous for its early North-West and Manchester maps, and despite his London centre of operations we find Senex being commissioned to undertake work such as this map of the Irwell and Mersey, designed to explore possible locks and navigational improvements.
We’ve already had a look at some more work of his in another post on this blog, when this year’s eclipse panic struck back in March, although we were concentrating on Halley’s astronomical achievements at that stage. At the foot of the Description of the Passage of the Shadow of the Moon over England in 1715 we find Senex reminding both astronomers and astrologers that he ‘makes, and sells the newest and correctest maps, and globes of 3, 9, 12, and 16 inches diameter, at moderate prices’.
Turning over the Library’s collection of maps of places further afield is what put us in mind of Senex today, however. For example, Senex worked on a splendid folding pocket-map of the major routes around the country, designed for carriage or horseback, and treating the routes as a linear set of waypoints to navigate by, and inns to refresh at:
A particularly splendid map of London from 1720 combines good survey work, clear representation and serious engraving artistry. You can see an overview of the centre section of the map here. Some of its ambition as a piece of art work is visible in the title and its decoration:
The greatest testament to the skill and application of the engraver comes when you look magnifying-glass close at the detail, covered on only fractions of an inch of paper each:
By the time of his death in 1740, Senex was both an enthusiastic consumer (as we know from his many subscriptions to important scientific publications) and a consummate contributor to Enlightenment England and its learning. His widow carried on his trade, and we as his readers and admirers can marvel and study for ourselves. 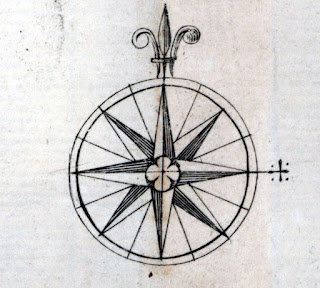