How to Keep the Magick Alive…

So after Valentine’s Day has come and gone, wedding bells have duly rung and the happy couple settle down to married life, we have some suggestions for keeping the magic alive from a sixteenth century (male) Neapolitan writer. 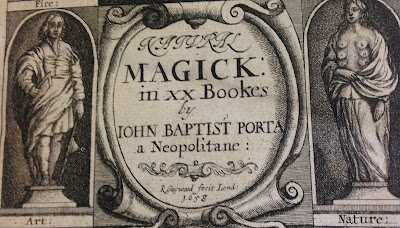 Giambattista della Porta first published Natural Magick in Naples in 1558. It was a very popular early scientific work, which was revised and reprinted many times throughout his lifetime. The twenty chapters or ‘books’ covered a wide range of topics, including ‘Treating of Wonderful Things’, ‘Of Invisible Writing’ and ‘The Increasing of Household Stuffe’. 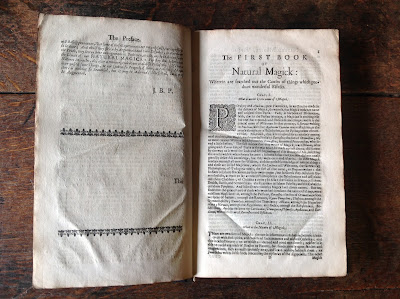 Book Nine is entitled ‘How to Adorn Women, and Make Them Beautiful’ and the author prefaces it by explaining that the reason for ‘adorning women’ is that ‘God, the author of all things…to make Man in love with his Wife, he made her soft, delicate and fair, to entice man to embrace her. We therefore, that Women might be pleasing to their husbands, and that their husbands might not be offended at their deformities, and turn into other womens chambers, have taught Women, how by the Art of Decking themselves and Painting, if they be ashamed of their foul and swart Complexions, they may make themselves Fair and Beautiful.’ 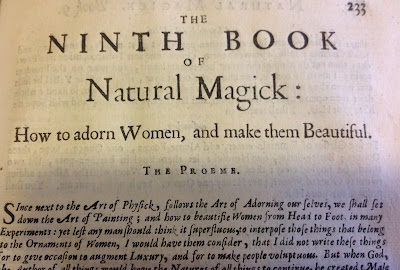 Chapter One starts with ‘To dye the hair Yellow, or Gold colour…’ (which is slightly curious as one assumes most of the women in Naples must have been olive skinned and dark haired). The ‘recipe’ for going blonde is relatively pleasant sounding and starts with ‘applying a mixture of Honey and white wine dregs to soften the hair, followed by Oyl, Cummin-seed, Shavings of Box and a little saffron mingled left on for twenty four hours’ although the final stage was to wash it off with ‘Cabbage-Stalks, Ashes and Barley Straw’.

However, the book then continues with an assortment of toxic treatments designed to improve a woman’s appearance (and her chance of hanging on to her man) including :

Many of the lotions and potions sound deeply unpleasant, for example:

‘A common Depilatory…Because sometimes a part is deformed with abundance of Hair, or for lack of Hair, I shall show how to make a smooth part thick with hair, and a Hairy part smooth, by depilatories’ Giambattista then proposes ‘Quick Lime’ or possibly an even more unpleasant solution used by ‘the Ancients’ who recommend the woman should ‘cast a pale Frog into water, and boyl it to a third part; and with that anoynt the Body’

Reading this in the twenty-first century, we may find this work quaint and curious on many levels. How could one man be an expert on optics, geology, metallurgy, cookery and women’s cosmetics? How could anyone still believe that a boiled amphibian smeared over the body could act as a depilatory? How extraordinary for a man to provide, in a book purporting to be a serious work of science, detailed advice to enable women to ‘adorn themselves’ with cosmetics to ensure that their husbands did not stray. 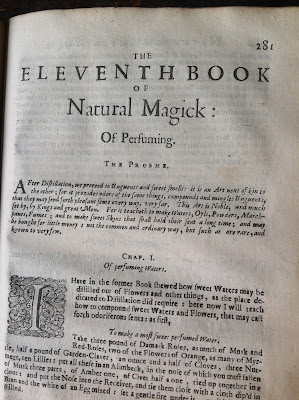 Giambattista was from a wealthy Neapolitan family, extremely well educated and married, with at least one daughter. He was an intellectual and philosopher who knew many scholars and scientists and wrote about a huge range of topics (including, physiognomy, agriculture and meteorology). The library has copies of several of his books including De Occultis Literarum Notis, a work on cryptography, and De Humana Physiognomonia, concerning the art of judging human character from facial features. 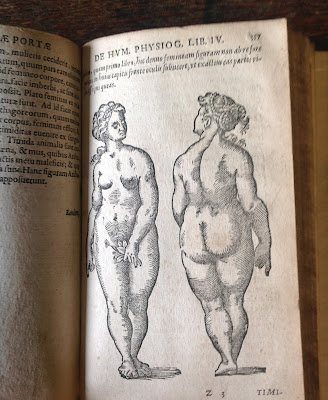 In an age when the distinctions between astronomer and astrologer and physicist and magician were still blurred, perhaps the best description of Giambattista is that he was  a ‘transitional figure – part magus, part philosopher, alchemist and scientist’.