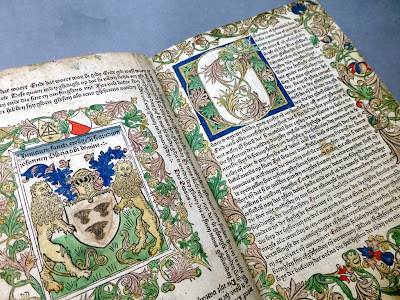 We were pleased to have a visit from early modern history students from Manchester University yesterday, and among the items we showed them was this Fasciculus temporum printed in 1480. 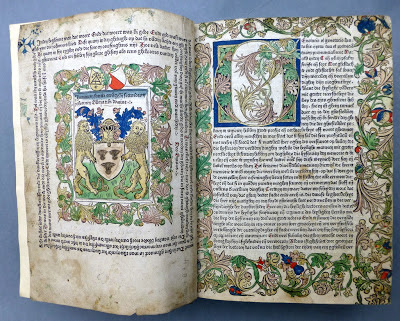 The Fasciculus temporum is a ‘universal chronicle’ compiled by Werner Rolewinck (c. 1425-1502), a Carthusian monk. First printed in Cologne in 1474, it was an extraordinarily popular book, running to more than thirty editions in its author’s lifetime, and being translated into all of the major European languages. The popularity is reflected in the fact that the Library has three copies of this work: Latin editions printed in Louvain in 1475 and Strassburg 1488 and the Dutch translation of 1480 printed in Utrecht, pages from which are shown here. 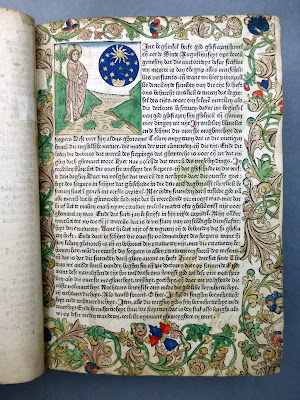 The printed version of the Fasciculus temporum is remarkable for its unusual and visually striking design. Instead of conveying the history of the world in a single column or set of vertical columns, the page is divided by horizontal lines into three sections. In the central strip are placed circles containing the names of Hebrew worthies beginning with Adam, together with each person’s life span and the number of children. Above this is shown the date anno mundi, calculated from the creation of the world in 5199 BC, and below, printed upside down, is shown the number of years before the birth of Christ. 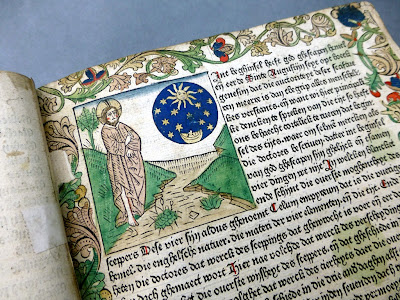 The top section of the page carries extracts from Biblical history with a running commentary, whilst the lower section shows secular history. Following the birth of Christ, the names of the popes fill the circles in the centre strips, and lists of saints and church dignitaries occupy the pages of the book, with the occasional secular philosopher and writer. The second half of the book is full of references to signs and marvels, with accounts of earthquakes, floods and storms. Anyone reading the news today might feel that little has changed. 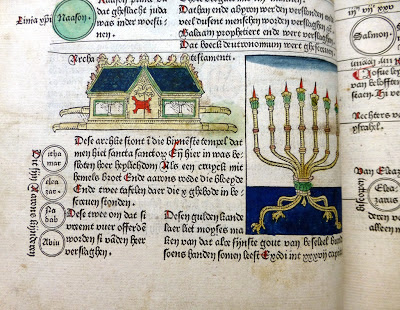 The result is a rather remarkable piece of typographic design, a wonderfully innovative way of tracking two different chronologies, the ‘anno mundi’ system and the ‘anno Christi’ system in graphic form. 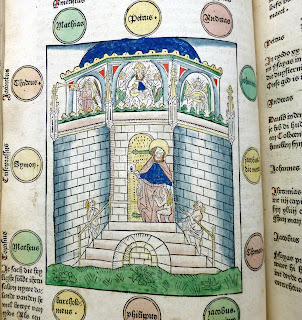 Of the Library’s three copies, the most striking is the Dutch translation, because it is hand-painted and contains sixteenth and seventeenth-century annotations and marginalia. One of the owners, at least, was the Walrond family of Sea in Somerset and Dulford in Devon, for a shield containing their arms has been printed on one of the pages. 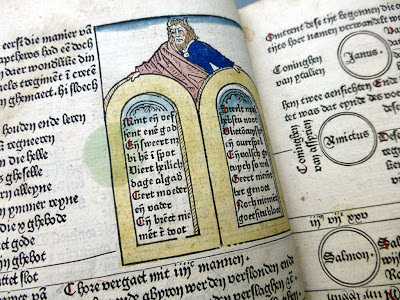 As a footnote for anyone who has managed to read this far and doubts their ability to read fifteenth-century Dutch, we offer this enlargement of the first page for your encouragement (click on the image to further enlarge it, just start reading and you’ll be amazed at your sudden skill)